With the economy still in the intensive care unit, there’s little in the way of disposable income available for most of us to update and refresh our rigs. But the fact is that there are more good sounding plug-ins for little or no money than in the past. I’ve been spelunking on the web lately looking for cheap plugs, and this time I struck a bit of gold from a UK company called LiquidSonics. They’ve produced a convolution reverb named Reverberate, and a parametric filter named Filtrate LE. Both sound good, and are ridiculously cheap -- just what the doctor ordered in these times.

Reverberate comes in a full version which sells online for £30 (around $45), and a slightly limited LE version which is charityware -- the company requests you make a donation to charitable causes they support (currently cancer research based in the UK). Filtrate is only available in an LE version that is also charityware with a donation requested, again to charity. I don’t know how long they’ve been around or what their background is, and there’s little information about them on the web. According to the company website, the first public beta of Reverberate was released in February 2009, so they’ve been at this for a bit. The DSP involved in these is not trivial, which tells me that someone there has been around the block -- these guys are geeky, as you’ll see.

Let’s start with the filter plug-in, which is the simpler of the two to explain, and will give you a good idea of how these products and their interfaces have been designed. 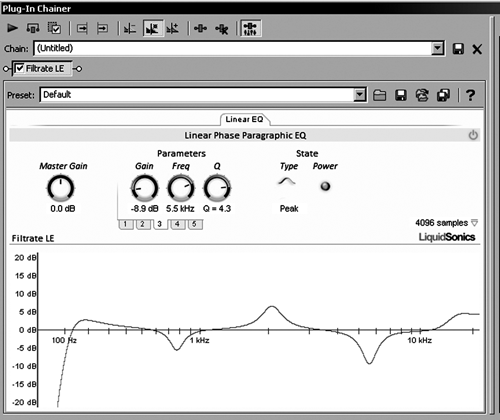 Filtrate LE is a linear phase five-band parametric equalizer for the PC only. It is available as a VST plug-in, and comes in one version that runs as a native process on your CPU, and one version that uses the CUDA processor on an NVIDIA graphics card to do the computation. This technique is common in the scientific community, where a CUDA (Compute Unified Device Architecture) processor is capable of running 3-D imaging algorithms up to 100 times faster than a general-purpose Intel Core 2 Duo processor.

Here’s the deal: if you have an NVIDIA GeForce 8 series graphics card in your computer, you may see a benefit at some buffer sizes over the native version. If you’re not sure, just download the native one, okay? The operating system requirements are minimal, as the plug-in runs on Windows XP, Windows Vista or Windows 7, and it works on a 2.4GHz Pentium 4 or better with 512MB of RAM. Given that it is a linear phase filter, I was pleasantly surprised by the CPU usage (native, of course). On a 2.4 GHz Core 2 Duo, four of them ate up less than 20% of my CPU usage... not free, but not bad.

The screen is simple, and is shown here instantiated in the plug-in chain of Sound Forge. A single tab at the top indicates that these are the controls for the linear EQ. You may note that they refer to Filtrate as a paragraphic EQ, which may not be technically correct since paragraphic EQs are graphic equalizers with an additional Q control for bandwidth. Nevertheless, the main controls consist of a master input volume knob, plus gain, frequency and Q knobs. The Type control has only one setting which is Peak, so it won’t do either shelving or filtering. Next to that is the On/Off button, which serves as a bypass.

There are five tabs below the knobs, each of which allows you to set the parameters for one of the five channels. As you make changes, the graphic below will reflect the current EQ curve. Unfortunately this means you can only set one of the five bands at a time, and you cannot click and drag anywhere on the graphic to make changes. Just above the company logo on the right is the “FIR length” measured in samples. Changing this value can reduce latency (or delay introduced by the filter), at the expense of introducing a small amount of phase distortion, but you can get this filter to near zero latency. If you don’t get it, you probably don’t need to mess with it.

The controls are generous in their breadth: Gain is plus or minus 20dB; Frequency on every band is from 20Hz to 22kHz, which is 2k higher than most; and the Q goes from 0.1 octave to 10 octaves so it can be quite narrow and surgical. The bottom line here is that Filtrate LE is indeed a very flexible and clean-sounding filter. The price is certainly right, although you will have to put up with an occasional nag screen to get you to donate whether you have or not. For me that’s a small price to pay.

November 01, 2003 10729
By Steve Cunningham There are good reasons to use a standalone digital mixer instead of mixing with a mouse. The obvious benefits are real faders and knobs, easy monitoring with near-zero latency, and the ability to control your...
Read More...
© 1988 - 2023 Radio And Production, LLC
Go to Top