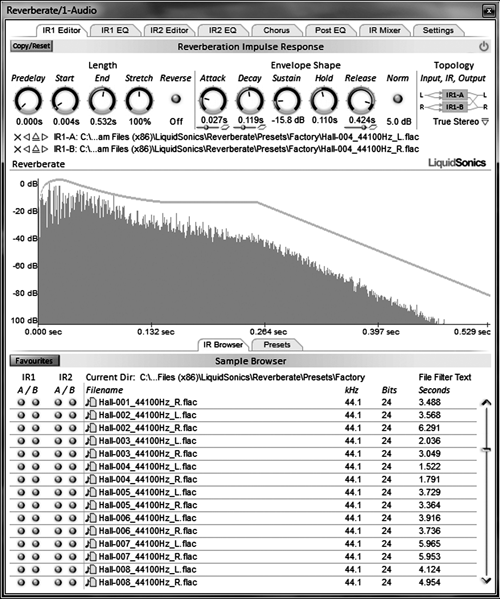 While perhaps not the most widely used effect in our audio toolbox, there’s just no substitute for good reverberation. And when you have to have it you have to have it. The most obvious use for reverb is to create the illusion of space, as for example a conversation occurring in a church or a gymnasium. But the judicious use of very small amounts of reverberation can thicken and add texture to a VO track without sounding cheesy. The key there is, of course, using a very small amount of a preset whose delay time is short.

At one time, the advent of convolution reverb promised to make our old algorithmic reverb units obsolete. You will recall that algorithmic reverb works its magic using software that copies the incoming sound, then mathematically generates thousands of delays and diffuses them to simulate the effect of space. However, the limitations of those mathematics produced a tail whose sound was relatively static over time as it faded out. And unlike what happens in a real room, in some cases loops can be heard as the fade continues. On the other hand, convolution reverb starts with an actual recording of a given room’s response, and processes the incoming audio with that recording to create a tail with no discernible repeats and that changes over the course of the fade. The math is much more intense, but convolution reverb trades increased CPU usage for a more realistic effect.

The difficulty with early convolution reverb plug-ins, besides that fact that the good ones were wickedly expensive, they lacked many of the sound shaping controls which were available on algorithmic reverbs. There was usually a knob for “size” or “length”, and perhaps some controls for the envelope of the IR, but little else. There was no way to adjust the pre-delay or early reflections, EQ, or the density of the reverb. Perhaps it was computationally difficult to implement those, or maybe the designers felt that the room sound was the room sound and shouldn’t be altered. This invariably left users at mercy of the impulse response file that was being used by the preset. If that wave file labeled “tiled bathroom” turned out to be too bright then, well, there wasn’t a great deal to be done about it.

More recently, convolution reverbs have included more of the sound shaping tools that were available on their older rack mounted brethren, albeit at an even higher price. But now, that too is changing.

Reverberate is a full-featured convolution reverb for both Macintosh and PC computers. The PC version is a VST format plug in either 32- or 64-bit flavors, while the Mac version is available in both VST and Audio Units format (32-bit only). System requirements are the same as for Filtrate. Reverberate features two separate, stereo impulse response processors whose mix can be modulated in several ways via two LFOs. The idea is to provide the two processors with a true stereo impulse response file, and then let each of them do its magic on the same incoming audio, which means true stereo reverb from a mono or stereo source. So far, so good. You can, of course, just use one processor, which yields a mono reverb signal at the output.

Reverberate’s utilitarian window resembles that of Filtrate LE, but with a lot more options. First and foremost are the eight tabs across the top of the window that guide you to one of two Editors, one of two EQs, plus several for effects and EQ, plus a mixer. Note that in the lower half of the main window is a persistent Sample Browser, enabling you to search from any of the screens both the Impulse Response files themselves, and the 48 presets that modify them (Browser occasionally cropped for clarity).

But the real magic is in the modulation and, by inference, the routing involved in that modulation. If you take a look at the screenshot of the IR Mixer page, you’ll see the block diagram and understand.

In addition to the dry signal moving across the top, which is delayed dependent upon the overall latency of the wet signal so as to preserve phase coherency, the input also goes to either one or both Impulse Response processors. Each processor has an associated screen in the GUI for adjusting Predelay, activating Stretch, and altering the Envelope of the IR. From there the path includes a five-band parametric EQ and finally a Chorus. Both the EQ and Gain are modulation destinations, although like Filtrate you can only adjust one band of EQ at a time. The output of the two processors is then mixed, a function that is yet another modulation destination. The entire wet signal is then directed through still another Chorus and five-band EQ, these being post-processor. Then the processed wet signal is mixed with the dry and sent on its way, back into the host editor of your choice.

The result of all this is a convolution reverb that sounds remarkably good, never mind the ridiculously low price. Stepping through the presets will give you an idea of the flexibility that’s available here. They range from well-behaved to out-of-control, and do a good job of presenting the capabilities. Particularly impressive are the 29 true-stereo presets, most of which succeed in creating a realistic reproduction of real physical space, and occasionally of non-real space as well. But the modulation paths, the sources and destinations, all of that contributed to a reverb that seemed much more alive than other convo reverbs I have heard.

One of the only areas where Reverberate does not stand tall against the high-priced spread is in the area of its library of IRs. Unlike Altiverb and Waves, Reverberate ships with a spartan 48 presets and their associated IR wave files. Fortunately, there is literally a vast number of IR files available on the Interwebz. Some carry a cost while others are free, but suffice it to say there are a lot of them and plenty are free. Reverberate will handle all the current non-proprietary formats for IR files, including .wav, .aif, and even FLAC and SDIR from Logic Pro. They all work just fine.

Let’s get this out of the way -- having played with the demo version for a few days, I bought my copy of the full version. Heck, I even sent a donation to cover my copy of Filtrate LE, which has become a favorite. At these prices, there’s little to complain about.

Should your budget be inflexible to the point where donations are out of the question, you can always download a copy of Reverberate LE as charityware. What’s been taken out of the full plug to create the LE version? First, there’s only one IR processor rather than two. Second, the sample and preset browsers have been removed. And finally, the post-processing EQ and Chorus have gone missing. But the most important items are still there.

But I popped the $45 or so bucks for the Real Deal -- nice upgrade to the old rig.

October 01, 2010 6826
by Steve Cunningham This month we’re going to take a look at a piece of Windows software that was specifically designed for use by voice actors. It records audio and allows basic editing, and also it names the recorded files. It...
Read More...
© 1988 - 2022 Radio And Production, LLC
Go to Top