JV: Your home studio is probably more of a voice actor’s studio — a Zephyr, a computer and a microphone, right?
Harlan: Pretty much. I’ve got a WhisperRoom, which I bought at the old house because I couldn’t find a quiet place. It turned out to be a very good buy because when we moved I hadn’t spent a lot of money building out a whole studio. This thing just packs down and the movers move it over and re-assemble it. It allows me to not be down in the basement or somewhere like that. I’m upstairs and can look out the window when it’s a beautiful day. I’ve got a couple of microphones that I like and a little Mackie board.

JV: Do you do a lot of editing there?
Harlan: I do some. I’ve got some clients who say just send everything, who like to edit. Others I’ll kind of ruffle cut it for them. I’m doing more and more producing now with clients that say, “Listen, can you put the sound effects in and mix the whole thing for us?” “Sure.” And I charge them for that obviously. If it’s just a narration client, and I’m just going to record a straight thing and do it with a phone patch, many times I don’t even charge them extra for the studio because it’s just a great convenience for me and for them. But if there’s a lot of editing going on, then that’s another revenue stream.

As for editing software, I use Cool Edit or Audition as it’s called now. I love it. I have played with most of the programs, and they’re all pretty similar really. I find ProTools difficult to work with and way beyond anything I need. Since Adobe bought Cool Edit, I think they’ve done some really nice enhancements to it. It serves my needs nicely and I know how to use it.

JV: You mentioned a couple of mics. What are your mics of choice?
Harlan: Well on ISDN… in fact, for an all around use it for damn near anything mic, the Sennheiser 416 has become really popular in the voiceover world. I first saw it on the west coast; the promo guys were using it. It has a kind of slightly brittle sound that really cuts, and it seems like on ISDN it just translates better than a lot of softer sounding mics. I saw them on the west coast a lot and then started seeing them here. They have sort of become the de facto mic for a lot of people. They are about 1200 bucks new. They’re on Ebay all the time for five or six. It’s really just a straight ahead good mic, and it’s good for a home studio because it’s a shotgun. With that tiny little pattern you don’t pick up a lot of room noise. The down side is if you are a real animated reader; the animation guys hate these mikes because they can’t move around a lot. I have to agree with them. I think it’s not a good mic for them. But for voice over, the 416 has become so popular you can’t go wrong with it, and you can’t hurt them. They are made for film work and you can pound nails with the thing, I’m sure.

Then if I want something a little warmer, I’ve got one of the Blue Mouse microphones that has a nice soft lovely sound, and it’s pretty. That’s about 90 percent why I bought it; I like how it looks. Then I’ve got a U47 I should sell, but I can’t bring myself to part with it. They’ve become ridiculously expensive and valuable. I probably should sell it because I never use it. And one of the things with home recording is you want to “keep it simple, stupid,” like the old saying goes. You don’t really want to have a lot of stuff to deal with, and while the U47 is a wonderful mic, it will pick up RF and you can end up with the taxi driver in the middle of your take. If you’re playing engineer and performer, no chance of that happening is a real good idea.

JV: Do you wear headphones when you’re doing voice over?
Harlan: Yes and no. Usually I do. I think you’re asking the question of whether or not they interfere with your performance, and I have to agree that they can. It depends. If I’m in a studio downtown, you almost have to have them just to hear the producer. I’ve always been in favor of just one ear, and I frequently ask the engineer to turn it way down. I just want to hear them. There’s that terrible danger of, “Wow, don’t I sound good!” At home I pretty much have to use it because I have to hear somebody directing me. But I’m not a big fan of two cans on. Suddenly it’s really hard not to start talking to yourself, and of course the whole idea of voiceover is that you’re not talking to yourself, you’re talking to a person. And that’s hard when you’re in broadcasting. Just the name itself, broadcasting, you’re talking to a big, huge group of people, like giving a speech. But voiceover work 99 percent of the time is far more intimate. It’s hard sometimes to try to connect with some invisible person, but that’s very key. 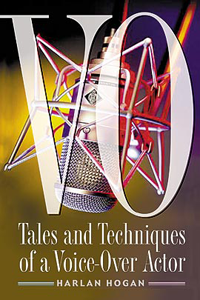 JV: So your books tell us all your tricks and everything you know, right?
Harlan: Well all but the few tricks I’m going to keep back and sell for big money next week. There aren’t that many tricks. I think the biggest trick — and this is kind of what we were discovering as a group of twelve in the workshop – is that the time spent in front of the microphone is so minuscule and such a tiny part of doing this for a living. It’s the business of the business that’s important. It’s sticking stamps on post cards like I was doing yesterday. I said to my wife, “God, this is a glamorous career.” And she said, “Oh yeah!” Then we laughed and I said, “This is the biggest secret; the work of voiceover work is getting the work.” And I can’t say that mantra too often – it’s getting the work. Doing the work is fun. Doing the work is actually easy. It ought to be easy if you’re good at it. But getting the work is the long hall. It really is a business. People who manage to do it for long periods of time have recognized it’s a business. You keep your contacts going and talk to your clients and look for new revenue streams and promote and deal with agents and deal with the IRS and all those things. Performing is fine, but it’s a tiny portion of it. To me that’s the biggest secret. It is no secret at all except I think a lot of people are in denial – “Well, yeah, but I don’t have to really become a good businessperson because I’ve got a lot of spots on the air.” Well, that’ll end too.

And a lot of times, doing the business of the business is not high cost. It’s just paying attention to the clients you have. Maybe you have a client that’s an avid golfer, and you read an article in a journal about something. You send it over — you know, personal. 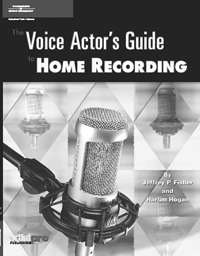 I’ve got a chain of seafood restaurants called Captain D's. They’re in about 26 states, although they don’t happen to be in Illinois where I am. They moved a session for me because I was going on a motorcycle trip – one of my other passions. So they gave me a ration of stuff on the ISDN patch. “Yeah, we had to move this because you’re going on vacation.” Blah, blah, blah, blah, blah. So I’m on vacation. I’m in North Carolina and I see a Captain D’s restaurant. I did a U-turn, zoomed back, and parked my motorcycle in front of the flounder sale sign. I’m all hot and sweaty and take out my digital camera. I took a shot of myself in front of the restaurant on the bike and then emailed it to my client saying, “Yes, but even on vacation Mr. Hogan is dedicated to furthering the fame of Captain D’s,” or something to that affect. They thought that was absolutely fantastic, funny. They sent it on to the client; the client thought it was amazing. Shortly thereafter I noticed that my scripts went from saying “announcer” to saying “Harlan.” So what have I done? I’ve established a name, even with the end client — who is the one that really counts — with a no-cost promotion. It’s about just kind of keeping your head in it. If you’re head’s in the business, you’ll just keep looking for things. And obviously, you can buy advertising. You can do ads, you can do PR, and you can have advertising specialties to give away. I’ve given away stopwatches over the years and mouse pads and other things related to the business that keep your name top of mind.

October 01, 1989 12143
What was once distant thunder is now a reality for digital sampling. Everything you always wanted but were afraid you couldn't afford is now available at a modest cost in an unprecedented new unit, the Dynacord ADS. The first...
Read More...
© 1988 - 2022 Radio And Production, LLC
Go to Top