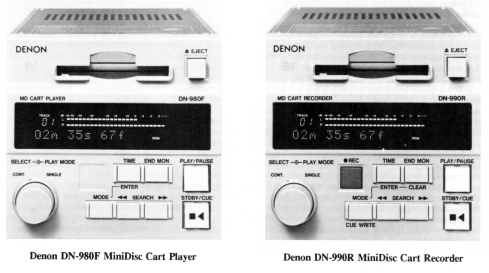 Face it. The cart is on the way out. Digital is on the way in. Forget the fact that with digital gear you get superb quality audio, random access, editing functions, and so on. Now it's even cheaper than setting yourself up with carts and cart machines. Ask around. Chances are you won't find any sane station owner buying new analog cart machines and a thousand or so carts. And pity those who made such an investment only a couple of years ago, thinking digital was still too new and too far away. Well, a couple of years have passed, and Sony's MiniDisc format is here, not only for the consumer, but for the professional as well. It's the format Sony hopes will replace the analog cassette. It's also the format Denon and others hope will replace the cart. We recently looked at Sony's professional MD cart machines [May '94 Test Drive], and this month we take a look at the Denon DN-990R MD Cart Recorder/Player.

The MiniDisc itself is quite impressive. Measuring roughly 2½ by 2½ inches, its sturdy construction is much like that of the familiar 3½-inch computer floppy disc. The magneto-optical disc itself is not visible at all, and is only exposed once inside the machine. There are 60-minute and 74-minute versions available. This extended recording time on such a small medium is possible with the help of ATRAC data compression.

The DN-990R retains the appearance of Denon's CD players, complete with data wheel inside the concentric Single/Continuous Play mode switch, Play/Pause and Standby/Cue buttons, End Monitor, and Search buttons. In fact, side by side, the Denon CD players and MD players make a very attractive rack of gear in your digital studio -- on-air or production. The DN-990R and 980F playback only unit will rack mount three across in a 19-inch rack.

First order of business was a trip to the local record store where, next to a modest display of pre-recorded MiniDiscs, the blank discs were found. The 74-minute disc cost $16.99 -- a lot when you consider that a CD of the same length filled with your favorite music costs less. But it's not so expensive when you look at it as a 74-minute "reel" of digital tape. Well, maybe it's a little expensive when compared to a 120-minute DAT. But maybe not, when you consider that you don't get random access and editing capabilities on DAT. $16.99 is expensive compared to a couple of bucks for a blank chrome cassette or five bucks for a cart. Then again, $16.99 is the deal of the century when you realize it can replace over 70 of your 70-second carts!

The MD is inserted into the DN-990R by pushing it all the way into the slot at the top of the front panel. The machine doesn't "grab" the MD while you're pushing it in. Once inserted all the way back, the disc "drops" into place, and then the mechanism takes over. So you are able to insert the MD as slowly or quickly as you like, and the unit leaves you with the sense that it is rugged enough to endure the rough handling that can sometimes occur in this business of ours. The eject button mechanically ejects the disc, so a disc can be removed even when the power is off.

The front panel is not intimidating at all, and recording and playback is easily accomplished without even a glance at the manual. Simply plug the disc in and press Record; the red Record button lights, and the Play/Pause button flashes. Press the Play/Pause button, and you're recording! Track numbers are automatically assigned. The display toggles between elapsed time of the recording and remaining time on the disc by pressing the Display button. Left/Right LED level meters display recording level. To stop recording, press the Standby/Cue button. Recording can also be stopped by pressing the Play/Pause button which puts the unit in a Record/Pause mode.

To play back a recording, use the data wheel to select a track number. If you have a large number of tracks on a disc, pressing in on the Select knob then turning it increments the tracks in units of ten. (Up to 255 tracks can be recorded on a single disc!) It takes the unit about three seconds to locate the track and load the first portion of audio into a RAM buffer to provide "instant start" or "cue to audio." Press Play/Pause and you're in business. Want to cue to a particular point within a track? Use the Search buttons to cue just as you would on a CD player equipped with the same buttons. Want to hear just the last few seconds of the track? Press the End Monitor button.

Recording and playback doesn't get any simpler than this, but that doesn't mean the DN-990R doesn't have lots of features and options. You get the best of both worlds -- a machine that's easy to use, yet it takes advantage of the digital technology within to provide some extra functions that take the DN-990R a little beyond a simple replacement for a cart machine or cassette deck.

The DN-990R offers an End Trim function that adjusts the end point of a track. This is non-destructive editing that is useful in trimming blank space or noise that may have been recorded at the end of a track. A Divide function divides a track into two separate tracks at whatever point desired. The Combine function joins two tracks together to make them one track. And a Move function moves a track from one location to another. For example, let's say you want track 5 to be track 2. Press the Mode/Cue button to select the Edit mode, then turn the data wheel to select the Move function. Use the data wheel again to select where you want to move the current selected track. If you move track 5 to position 2, then track 2 becomes track 3, track 3 becomes track four, etc.. You also get an Erase function for erasing single tracks or all tracks on the disc. Other editing functions include track and disc naming. Text input is done using the data wheel, a process much slower than input with a keyboard (unless you can't type).

What can you do with these editing functions? If you're one step ahead of me, you realize the Divide, Combine, and Move functions are basically a form of cut and paste functions. (There is no Copy function.) But the 990R is not a digital workstation, and the cut and paste functions are not performed as quickly as they are on a workstation designed for such. So, don't expect speed from these editing functions, but you do get the luxury of having them. How useful they are depends upon your use of the 990R. If you want to record a voice track a segment at a time, the Combine function is perfect for this. Let's say you have a spot with three segments done by three different voices. Track 1 can be voice 1, track 2 voice 2, and track 3 voice 3. When each is recorded, use the Combine function to join 1 and 2. Track 3 then becomes track 2. Use the Combine function again to join the new track 1 and track 2, and all three segments are now track 1. Or, you could simply put the unit in Continuous Play mode and let the tracks playback in sequence, using the End Trim function where necessary to eliminate pauses between tracks. Let's say each voice talent didn't arrive in the order of their appearance in the spot, and you ended up with the segments out of order. The Move function fixes that. In the case of a dialogue spot where you have all of the lines from voice 1 on track 1 and all of the lines from voice 2 on track 2, you could use the Divide function to separate each line and assign it an individual track number, then use the Move function to put them in the correct order. These are things you CAN do with the 990R, but the unit was certainly not designed to compete with digital audio editors. Cut and paste on the 990R, especially on the dialogue spot just mentioned, can be time consuming.

August 01, 2008 10466
In the beginning, there was the Yamaha NS-10 studio monitor. With its compact size and white woofer cone, and despite a distinct lack of bass and brittle high-end that required Kleenex over the tweeters — the specific brand of...
Read More...
© 1988 - 2023 Radio And Production, LLC
Go to Top