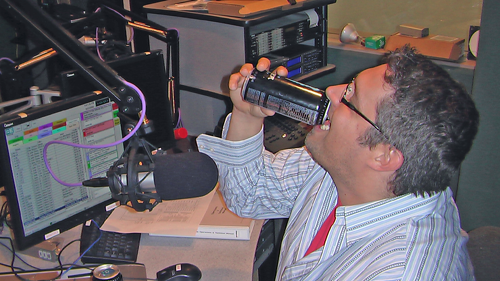 “Texas” Terry Phillips may be one of the hardest working production dudes in radio. We managed to catch up with him one Saturday afternoon just as he was waking up. Seems he got home from a long Friday at work at 5:30 that morning. No doubt, Terry has a passion for his work, and it certainly pays off for CBS Radio’s Country and Classic Hits stations in Detroit, WYCD and WOMC. And there’s work for a number of HD and internet stations as well. You may have met Terry at one of Dan O’Day’s recent Creative Summits where he was a panelist. This month’s RAP Interview checks in with this busy creative as we take a peek at these two successful stations and Terry’s approach to their imaging. Check out some great audio from Terry on this month’s RAP CD.

JV: Tell us how it all started for you and some of the highlights along the way to WYCD.
Terry: I was actually one of those annoying kids who used to call the radio stations so much the jocks knew me. I even had a couple hotline numbers. I graduated from South Garland High School in a suburb of Dallas, Texas. I went to East Texas A&M, East Texas State, which became a branch of A&M. I worked at teeny little stations like KBUS in Paris, Texas, and KIKT in Greenville. That was my freshman year in college and part of high school. I also did an internship at KZPS.

Then I got a job as a board op at Y95 in Dallas, which used to be a huge CHR. Buzz Bennett was there when I was hired. He was a pretty famous CHR programmer in his day. I literally showed up every day with a tape and resume for nearly a month. The APD came out and kind of giggled at me and said, “You sure are persistent.” Then he goes, “I need a board op for tonight. I’ve heard your tape. I know you can run a board. We’ll see how well you can do on the air later.”

I looked at the board. Back then, everything was the Pacific Recorders boards, PR&E. The air check machine back then was cassette tape. It makes me sound ancient, but it wasn’t really that long ago. And the air check machine was fed by the Aux 2 buss – I figured this all out like the first hour in. The old boards, even some of the new digital boards, have multiple busses. So, I took the mic out of program, which went on air, and set it only for Aux 2, and I ran a live show on the air check machine with me on the mike, but I was just board op-ing actually. I took out the cassette and slid it under the APD’s door. I got woken up by the APD the next day with a couple of expletives, a laugh, and telling me he was driving home from the bar and listening to the station, so he knew I wasn’t on the air. But he wanted to know how the blank did I do that?

I explained it to him, and he goes, “You sounded pretty good. Can you be here at 10:00 a.m.?” I had just pulled an all–nighter, and it was about 9:00 in the morning. Literally, that meant me throwing on a hat, throwing on some jeans, and driving from a rural college town, Commerce, Texas, about 90 miles all the way there. But of course I said yes, and I did.

From there, I just fell in love with the production room. I followed Brian Wilson around so much, I’m sure he just hated me. I know I annoyed the piss out of him, but that’s why I fell in love with production. When Y95 shut down, I was able to hang on for a while when it was waving the oldies banner for five seconds because I was one of those people who showed up early, left late, and always asked for things to do.

Being a computer geek, they had this new graphics software for sales pitches and I was the only one who knew how to work it. So, on top of board op air shifts, and at this point, some backup production, fairly rudimentary stuff, I was also putting together sales stuff. Finally, I got pink–slipped as Evergreen slimmed the station for sale.

I had an interview with a gentleman who was being top secret about this new station he was signing on there in Dallas. We talked about the overnight position. I got an offer in the meantime to go to El Dorado, Arkansas, the middle of nowhere. But at El Dorado, Arkansas, the PD there had been in a major market, and he was one of those charismatic guys that you just wanted to work for.

So, I cancelled the meeting, and whether I would’ve gotten offered that job or not at the station that turned out to be the first Young Country, I’ll never know. Probably not. There were probably more experienced people for the overnight shift. But I took the job and did nights in El Dorado, Arkansas for a month. They moved me to mornings and gave me the Assistant Program Director stripes.

I stayed there for two years, then went to Wichita, Kansas for literally one book. I was in Tucson, Arizona for five years then got offered a job in Flint, Michigan to sign on a country station and be the Production Director, which is what I wanted to do. So, I took a step down to take a step up. I thought, “I’m young. I can recover from Flint.” Not that Flint is a bad place -- despite the bad press, Flint isn’t a bad place at all. I got a lot of experience. Our first book we signed on at number 3 in the market, and beat the pants off the legendary country station there -- knocked them down to six.

About two years later, I got a phone call from ‘YCD in Detroit, and yes, I did recover from stepping down to move up. That was almost ten years ago, and I’ve been at CBS Radio ever since.

JV: Brian Wilson must have been a tremendous person to learn from.
Terry: One of the best writers hands down in the business that I know of. Nothing disparaging against anyone else. I obviously had some close working with him, and I was wide–eyed. Between him and Buzz Bennett, everything they would bother to babble at me or waste their time with me on, I would just sit there like a sponge.

I’m in charge directly of WYCD and WOMC, a country and a classic hits station here in Detroit. I’m also responsible for about five internet radio stations and HD stations, ranging anywhere from Super Oldies -- the whole Motown do–wop thing -- to Alternative Country, to Psychic Radio, which is a talk radio station with live astrologers, mediums and the like, taking phone calls. When we were putting together the station, they were looking for a slogan. I said jokingly, “We know you’re listening.” Greg Strassell loved it, and that’s been the slogan of the station since sign on. You’ve got to do something like that a little different. The imaging is very ethereal/techno sounding. We have a Brit with a higher register male voice doing the VO, and the bumper music and the music we use in imaging and the like is a cross between Lilith Fair, pop radio, and alternative. There are well over 1 million unique listeners regularly, so they’re doing pretty well.

January 01, 2003 6955
by Steve Cunningham Choosing an audio editor is a bit like buying a new car — it’s a combination of both practical and emotional considerations, and it’s intensely personal. And once we’ve made a choice, we tend to defend it...
Read More...
© 1988 - 2022 Radio And Production, LLC
Go to Top