Pro Tools LE allows up to 128 tracks in a Session file, but only 32 of these can be play-ready at one time. As mentioned above, the Music Production Toolkit makes available an additional 16 play-ready tracks to every Session. That means a total of 48 active mono or stereo tracks in a single file, all subject to your computer’s ability to actually play that many tracks (of course). The extra tracks are only available with the Music Production Toolkit, so their dollar value is whatever you think it is.

Now I realize that 48 tracks is probably serious overkill for most radio production projects (unless you’re Eric Chase, of course. Hi Eric!). But it’s nice to have them available — imagine having enough tracks to do a tag for nearly every state in the Union, without having to activate tracks or switch playlists for each take. They’re all just right there waiting to play, each on its own track. I like it, even if I seldom use it.

Broadband Noise Reduction LE has been taken from the Digidesign’s DINR plug-in suite, and the company says that it’s intended for suppressing “unwanted elements such as tape hiss, air conditioner rumble and microphone preamp noise.” Frankly, I don’t have to deal with much tape hiss or preamp noise anymore, but I do occasionally have to clean AC noise from recordings. 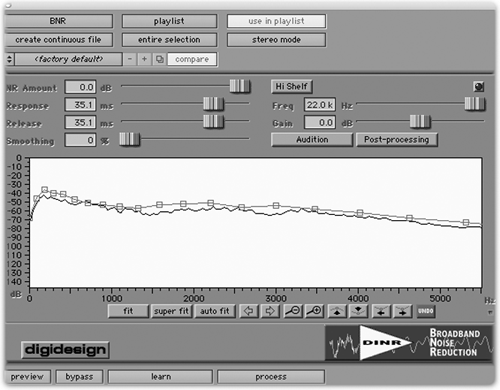 BNR has remained largely unchanged for a few years, and while it does a fine job knocking back noise levels, I heard it working once it got past about 6dB of reduction. If you need more than that, two or more passes through with modest reduction settings always works better than a single pass with a high amount of reduction. Suffice it to say that if you need it, you need it, and while BNR is no longer the most effective noise reduction plug out there, it will do the job. Digidesign sells DINR LE for $495.

If you’re a musician, you’ll like the Hybrid soft synthesizer that comes with the Music Production Toolkit. If you’re a radio production type, it will have little value to you. The same probably goes for Sound Replacer, which is specifically designed to replace drum sounds in a live recording with better-sounding samples. I haven’t found a use for that one in production either, but I hear from those who do use it that it works well.

Some of you may use Pro Tools’ Beat Detective to beat-match music. If that’s the case, you’ll be happy to know that the Music Production Toolkit makes Beat Detective function across multiple tracks at once, just like it does when running on an HD system. If you use it, you’ll like that part.

It’s important to note that the Music Production Toolkit lists for $495, and the street discount is miserly. So what we have here are three useful plug-ins that sell individually for about $1400, plus the extra 16 tracks. All that comes in a package that can be had for a bit less than $500. Is it worth it? It depends on how you look at it. It’s certainly an absolute bargain compared to a Pro Tools HD system with a $8000 Core card and a $4000 HD interface. That’s what you’ll spend for more than 32 active tracks (and the updated Beat Detective).

But even if you don’t lust after an HD rig, we can just look at Smack! LE and TL Space and judge the Music Production Toolkit as a good deal (and the extra tracks are a bonus). If you want more horsepower from your LE system, Steve sez check it out.