Last week, my wife came down into the “Snake Pit” (my underground home studio, affectionately named after the old Hitsville, Detroit home studio because of the cabling everywhere), and looked at me funny.

“Why are you crying, honey, anything wrong?” she asked.

“I’m not crying,” I quickly and manfully replied, uh, through a crack in my voice!

“What is that wet stuff running from your eyes down your cheeks?” she insisted.

Indulge me… the following is a simple, but LONG answer.

I bade her sit down and listen to things with me that I had never heard before, or don’t remember hearing, what with the current wave of cheap “boom-box” quality speakers passing themselves off as studio-monitors which seem to have surfaced in many radio stations in the last few years. They are especially ubiquitous at the more cheaply run chains. No names mentioned. But their sound, which I had to live with for a while, made it seem like you were “flying blind.” Impossible to EQ with, even though they looked impressive, they were definitely, “all hat, no cattle.” 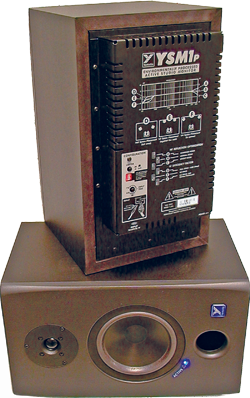 I was trying out a set of new bi-amped speakers (YSM1-P) and subwoofer (YSS1) from Yorkville, based in Toronto, Canada. They are a manufacturer with very high quality standards. After hearing them recently in a convention hall, I asked the rep if I might borrow a set for a week to try them out in my studio space, which would be more of a fair test than the sound I was getting at the convention, which, nonetheless, was still way cool enough to have stopped me in my tracks. I reasoned, wow, if it sounds that nice here, I’ve GOT to hear these in my own studio surroundings!

When my wife crashed my “party,” I had just put on an ELO CD, recalling that there was a lot of nice instrumentation going on with Jeff Lynn in those days. Well, this was a defining moment of bittersweet all in a few seconds! Through the Yorkvilles, I heard sounds on that original recording I’d never before heard on that CD or even when the cuts were originally released years ago, probably when my hearing was even better! The definition, smoothness and imaging were breathtaking. The shimmering cymbals, the sonorous spread of gongs, the ringout of reverb, the articulation and breath in the vocals, the texture of the voices, the rhythmic slip and slide of brushes on snares, the tickling, vibrant rattle of tambourines… this was an emotional experience right up there with you-know-what!

I grabbed the midrange control on the console and tweaked it only 2 db. WOW! It just POPPED out of the monitor. Try THAT on a KRK or a Mackie monitor. I turned on the low end shelving on the board and heard the spot of the roll-off with dead-on accuracy. Next I put in an old audiotape cassette, just to be sure I could hear a lot of hiss! These monitors are the tool-of-the year for me!

I wrapped up the listening session with Al Schmitt’s Diana Krall re-release on the new Sony “Super-CD” format. This was the real test. And it was like being there. For a while, I thought I was even getting “the scent”! (Apologies to Al Pacino — Whooooah!)

February 01, 2005 8730
by Steve Cunningham Some of the most interesting audio software comes from out-of-the-way places. For example, Waves Ltd. produces a complete line of highly popular plug-in processors from their headquarters in Tel Aviv, Israel....
Read More...
© 1988 - 2022 Radio And Production, LLC
Go to Top