Radio Netherlands (www.rnw.nl) is Holland’s external public broadcasting service. With more than 50,000 hours of output per year, it is one of Europe’s more active multimedia operations. You can hear us on short-wave, satellite, and in Real Audio on the Internet. In 1996, Radio Netherlands ran a side-by-side comparison with several networked systems for digital audio. By July of 1997, the choice for Dalet for use in a newsroom/features environment was clear.

“We didn’t want to replace audio tape with piles of removable hard discs or even MiniDisc. We needed a networked solution to share audio files stored in several languages among 70 workstations scattered around the building,” says Jonathan Marks, Radio Netherlands Director of Programmes and RAP member.

Dalet uses Digigram audio cards, and these are expensive in comparison with other sound cards. We could have opted for excellent editing software such as Cool Edit Pro and a standard soundcard, but this wouldn’t allow us to network the audio around the building and share so much audio at the same time. We wanted a clear user interface so that producers could find raw material on-line, edit it quickly, and schedule the final items to air. We concentrated first on getting our news and current affairs into a tapeless environment. We thought feature producers were better off sticking with tape for the time being, and we’re right. That hasn’t ruled out experiments of course, but the blanket rule of “no tape please” is still 18 months away.”

By April 1998, transmissions in Dutch, Indonesian, French, Papiamentu (spoken in the Netherlands Antilles), Spanish, and Brazilian Portuguese followed on from the first experiment with the English Language Service. We phased in the implementation, creating several tight deadlines rather than working towards a specific “D” day for Dalet’s introduction. We could see that some very creative people were dreading the day they would have to abandon tape. But the period when conventional tape and DALET were running side-by-side was only a matter of days. Tape was very quickly abandoned, and those who made the change do not want to go back to tape. 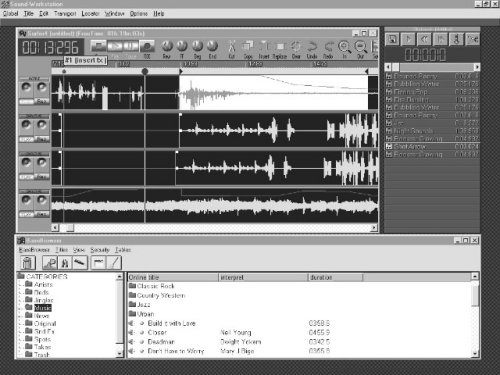 Radio Netherlands redesigned its newsroom with digital editing in mind. To save desk space, the DALET computers are stored in 19-inch racks in a separate air-conditioned room ajoining the newsroom. The fileservers are connected to a Rorke Raid-unit, which can store over 1300 hours of audio. The network has been split up in two segments, one 100 GB shared production segment and one 100 GB switched broadcast segment for the studio’s. The ceiling lighting in the newsroom was upgraded to a high-frequency flourescent system, thus avoiding screen glare. 17-inch screens were selected as standard and attention paid to the design and layout of the audio keypads. Apart from a 15-minute maintenance period on Sundays, the system is being used 24 hours a day, usually with between four and eight radio channels running simultaneously. After transmission, Dalet items are stored off-line using CD-WORMs.

Two external contractors wereresponsible for in house audio facilities, maintenance and training. Together they designed a “break-out-box” which fits under the monitor. This enables journalists to quickly access analogue sources and record them into Dalet. Incoming audio from cassette, DAT, telephone and ISDN can be selected quickly using the minimum of controls. The standard layout of the Dalet surfer has helped standardise the new digital working methods. 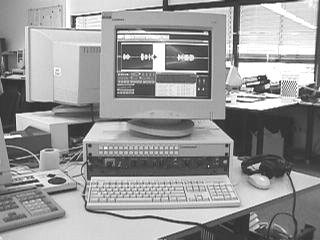 The next phase at Radio Netherlands will be to look at how DALET workstations can be used for feature producers including promos. This part of the process is more complex, since producers will need some intensive training on the multi-track capabilities of the system. Of course the promo makers use nothing else, but regular broadcast journalists are used to doing final mixes with a technician.

Early experiments with DALET version 4.3H concluded that Multi-track Surfer was “NOT ready for prime-time.” If you faded a track and then moved it, the fade reset itself and disappeared. In addition. there was no easy way to dip a track for a simple voice over. There was a work-around, involving copying a track and then cross-fading the first track into the second, but this is time consuming. Compared to a program like Cool Edit Pro, the multitrack surfer in DALET was crude.

To be fair, Version 5 of DALET has addressed the current limitations of the multitrack DALET surfer. We need to do be able to zoom out on a track to do custom fades. The voice-over (or ducking fades) will be simplified. We are currently developing a migration plan to decide if and when we migrate to Version 5. 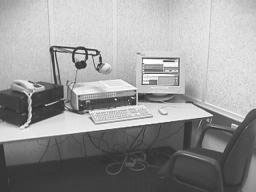 Radio Netherlands' newsroom system is due to be replaced shortly. One of the requirements will be that the system can communicate with the DALET audio system. “We need to aim for a single workstation, not a physics laboratory of screens and dual keyboards,” says Jonathan Marks. “We have had problems running Office and Dalet on a single PC using the Novell client server. Until the choice for the newsroom is made, we will keep DALET terminals separate from PCs running Office 95. We found that DALET slowed down by a factor of 6 and traced the problem to an incompatibility in the Novell client server. Novell isn’t planning to fix the problem in the short-term.

Staff at the station emphasise that training at the right moment has been crucial to the system’s acceptance. People want to learn new skills just before they use them. Journalists need practical instruction working to real deadlines using material they’re familiar with. “So,” explains Marks, “we’ve tailored the courses to give a general overview and then focus on specific tasks. In general, this approach has worked. It’s a big challenge to work in a multi-lingual environment. But overall, we think Dalet is responsive and the system is clearly improving all the time.” 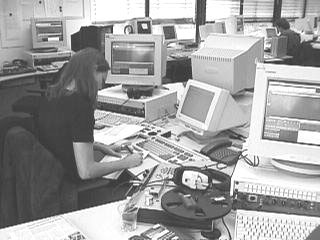 We are constantly examining other systems on the European market like Radioman or DAVID. Each system has its pros and cons. We don’t regret opting for DALET, and in regional radio in many parts of Europe, DALET has cornered the market. They have an open approach to the architecture. Whereas some companies make a standard version and try and get everyone to use it, perhaps DALET goes too far in providing custom versions. I’m sure that because of the scale of the networks, only major network hubs are really interested in these kind of networked audio systems. You need a 4-5 terminal system to make networked audio worthwhile. For overseas correspondents (one terminal), we’re looking at Cool Edit Pro, and then compressing the result in MPEG-3 before sending it over the Internet. Nobody is buying tape recorders for studio use.

DALET is based in Paris, France. Their system info is on their website at www.dalet.com.  They recently made a lot of effort to improve communications between HQ and their clients. Radio Netherlands is about the third largest. Deutsche Welle and CBC Canada have larger systems. There is also an independent closed user group open to existing Dalet clients at www.dalet.org.