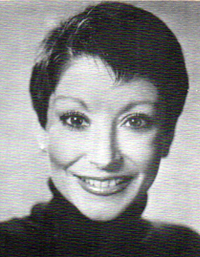 She is indeed the voice-over coach of the pros. Her clients are some of the biggest voice-over talents in the country. They affectionately call her "The Voice Shrink." Her sensitivity to the human voice is almost magical. Her name is well known to those in the voice-over business, but her talents don't stop there. As a commercial director, she has numerous national campaigns behind her. She has directed films for Vestron and Disney. She became the first female director to win a Clio. The credits go on and on.

In the past few years, Marice Tobias has gained wide acceptance in the industry as one of the best voice-over coaches around. This month, we visit with Marice and get some insights into the art of delivering a piece of copy. We also get some tips on what is it that makes a great voice-over demo tape, and how to get the work. Make some room in the memory banks -- this one's long and loaded!

R.A.P.: Tell us about your background in the industry and how your voice coaching business started.
Marice: I started my career in New York, first as a script supervisor in commercial production, and then became a director. When I became a director, it was before the women's movement really had any effect on the industry, so it was very much a pioneering effort on my part. I was the first woman at a production company in New York.

I moved into agency work when I came to California. I had been brought out here to direct a spot for the agency that would become Wells, Rich, Greene/West. I was then offered a job and became Associate Creative Director at the agency and was Head of Copy. I continued to direct all the TV, radio, and multi-media productions while I was at the agency.

When I became an agency person, that's when I encountered the voice-over field. I would always do a director's cut (which was the first time the agency ever saw a director in the editing room), but I was never around long enough to do the post-production and work with the voice-over performer. So it was always a surprise to me to hear the voice when I saw the spot on the air.

Now I'm an agency person, and I'm working with voice-over performers. I'm noticing something very interesting. No matter what their background is, whether they're coming from broadcast, from acting, or from a music background -- which are the three areas that feed into voice-over - everyone forgot that this was acting. They would go in the booth, and my judgment was that they were imitating "the guy on the radio." A lot of these per-formers I had worked with, not only on the coast, but in New York as well. I knew their work on stage and in commercials, and some-thing happened. They changed, and they turned into what I felt was what they thought people were looking for. So, I realized there was a sameness to the work and a lack of identity. This is just an observation I made.

About the same time, I had directed a campaign, won a Clio, and got offers from production companies in Los Angeles. I accepted one at the Peterson Company and went back into production full time. It was at that time that I moved back from Irvine -- where our field office was for Century 21, which was my account -- to L.A. Bob Lloyd, the voice-caster here in Hollywood, called me. He said, "You should have your own workshop." I was astonished! That's one thing L.A. is famous for; there are a lot of opportunities for performers to get training. I said, "But there are at least ten workshops that I know of, because I've guest-directed at some of them." And he said, "There's nothing for the working pro. Some people are still doing the same read they did when they got into the business in 1971." I thought he was very, very astute because that was another observation I had made. There didn't seem to be any growth in the business -- it was the same old thing.

My theory about voice-over is that any of the performing arts are applied art. As such, they reflect societal changes and communications changes, and voice-over was kind of frozen in time.

So I began with a workshop. Bob had twenty people sign up immediately and had someone volunteer to be my assistant, and I was in business a week later.

I did that workshop for about six months. Then my father passed away, and I had to leave town for a while. I came back to town, but while I was away, I was formulating the thought that I really wanted to work with performers privately, as much as possible. I found that when I worked with them privately, I was picking up things -- picking up creative blocks, picking up stuff that was going on for them as a person -- that was showing up in their work. I really couldn't share that with them in front of a group of people. Combine that with the fact that a hot, new performer had come to town and talked to me about how he didn't really feel comfortable working in a group. He asked if I would consider working with him privately. I said yes. His name is Chuck Riley. He was my first private client, and I think that was a spectacular beginning to my coaching. Since then, I have worked with quite a few of the heavy hitters in the business, in promo as well as voice-over animation and narration.

That's how I started [the coaching]. It was essentially Bob Lloyd's idea, and for many, many years, coaching was an adjunct to my writing and directing. I've directed a feature film, and I've also done a film for Disney and numerous commercials. I'm still a writer/director, but in the last two and a half years, I've been traveling [with the coaching]. Once again, this was someone else's idea. I have a client in Washington, DC who voices most of the commercials for the Republican Party candidates. He had worked with me out here then moved back to Washington. He kept telling me there was a very respectable group of performers who had been going on their own steam all these years and really had no insight and no guidance in what they were doing. He felt I would be impressed with the caliber of performers, and he felt they would also benefit from what I did. Then, my dearest friend, who had moved to Washington from New York, was in a production at the Arena Stage and called and asked if I could come and see it. So I put the two things together, and that was my first trip travelling with coaching.

I realized that my client was right. The people were very talented, and it dawned on me there must be people all over. Wherever there's a microphone, wherever there is voice-over, there are people who could benefit from what I do. So, I came back to LA and I decided to experiment. My first official city, after Washington, was Chicago. I had been there years ago when I first became a director and found they were very receptive. The advertising business there is completely organized, so it was very easy to access people and information, and the agents, too. I started putting out the word and, through some clients, got referrals. I did my first trip to Chicago about a year and a half ago. Tomor-row, I leave for my fifth trip to Chicago.

Chicago has been real good to me. I've produced a lot of tapes there and basically helped shift the level of consciousness in terms of the "new read." That was something I started working with in the mid-eighties with some of the performers that were coming to me that didn't quite fit in to the "Harry Handsome Announcer" voice print. And yet, there was something very special about them. So, instead of guiding them into what was being done, I guided them into being absolutely excellent at what they were doing. Then, all that needed to happen for these people was the right campaign. The right combination of the campaign and the performer would launch them, and sure enough, with each one of them, that is what has happened.

So, a lot of the "new read" that you hear -- that more laid back, quiet, intimate kind of delivery -- started with my coaching some of these people in the mid-eighties.