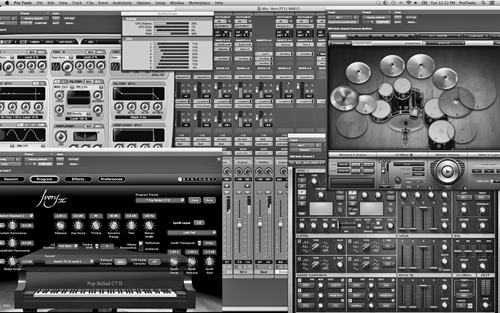 Yes, it’s that time again. Avid has release another major revision of the program that some of us love, and some of us love to hate -- Pro Tools. I’m actually feeling a bit guilty about this, since it is my perception that the percentage of Radio And Production readers who actually use Pro Tools has diminished over the last few years. For many, particularly voice talent, Pro Tools is still seen as too big and too complex to use for daily work. I get that, but I continue to believe that there are as many if not more positives than negatives to Pro Tools for voice over (although I’d prefer not to hash those out here and now). In any event, for those who are already using Pro Tools as well as those visiting it with an eye to becoming a first-time user, you should know that the new Pro Tools 11 contains some fundamental changes, which is what happens when you completely re-write your audio engine.

However, these improvements have come at a price which is not inconsequential. If you’re a Pro Tools user, you will likely need to upgrade your hardware. You will also likely have to upgrade your plug-ins, and in some cases re-buy them altogether. So “out with the old, in with the new” is not free. Should you take the plunge? Let’s have a look.

Pro Tools 11 (hereafter PT 11) is now a full 64-bit software application. This of course means that you are probably going to have to upgrade your operating system. As has always been the case, it is also assumed that you are running an Avid approved computer platform for use with Windows.

On the Windows side, PT 11 runs on (64-bit) Windows 7 or 8 Home Premium, Professional, or Ultimate edition with Windows 7 Service Pack 1. Note that Pro Tools HD 11 (PT 11 HD) does not support Windows 8. For native use (PT 11) you’ll want at least 4GB of RAM, and 8GB or more is highly recommended. For PT 11 HD, 8GB of RAM is the bare minimum, with 16GB or more highly recommended.

On the Mac side, you’ll need to be running Mountain Lion (10.8.3), the 64-bit version of Mac OSX, and the same amount of RAM as on Windows. On both platforms, you’ll need a minimum of 15 GB free hard disk space for the installation, and a USB port for iLok authorization. Some things never change.

If you are an Mbox owner, the news is “less good.” PT 11 no longer supports any of the beige Mboxes, including the beige Mbox Pro. The newer, charcoal gray Mboxes sometimes known as version 3 are supported. Avid originally said that the Firewire-based 003 interface would not be supported, although recent news has them backing down from that particular position. Stay tuned for more information on the 003 front.

If you are an existing HD user, the news is even more “less good.” Avid have discontinued support for the “legacy” Pro Tools HD Accel systems. Originally they also included the silver HD interfaces introduced over a decade ago with the original Pro Tools HD system. This resulted in a whole lot of pissed off users, particularly those who have continued to happily run their Pro Tools 10 HD software on their HD rigs. More recently Avid have announced that most of the silver HD interfaces will still work, but will still require new processor cards. The previous HD cards have to be exchanged for HDX cards or for HD native cards. Again, this has resulted in some pissed off users, although users have known about this for at least two years. You will want to visit Avid’s site to see what you will need to replace to run PT 11 HD.

August 01, 1999 10885
By Steve Cunningham Voice processors that combine a mic preamp, a compressor, some EQ, and a limiter have become quite popular. They give you all the tools you need to produce great voice tracks in one box, without all the...
Read More...
© 1988 - 2023 Radio And Production, LLC
Go to Top