This weekend I am attending the October 2012 edition of the Faffcon Unconference for voice actors, and thought it might be interesting to profile a couple of products I’m actually using here. Among other goodies, I’m using a Fostex AR4i interface to record some presentations on my iPhone, and am processing some of the captured tracks using iZotope’s new Ozone 5 mastering plug to give them a little more oomph and crispness. This is eval under fire, so let’s take a look. 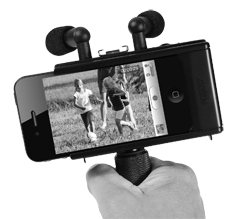 The Fostex product is one I mentioned in a NAMM wrap-up in February, along with a promise to get hold of one and give it a full workout (which is exactly what’s happening!). Essentially, the Fostex AR4i wraps a handle, an analog interface and a couple of microphones around an iPhone 4, a 4s, and (soon) an iPhone 5. It works up to and including iOS 6, although the latter requires a software update which should be available as you read this. It turns your iPhone into a good-sounding portable recorder that is easy to handle using the knurled metal grip included in the box, and comes with two detachable microphones for a bit of versatility.

Once the phone is slipped into the AR4i’s cradle, the male iOS connector mates with the receiving connector on the bottom of the phone. Power for the box is provided by two triple-A batteries, which makes it relatively simple to buy and carry extra batteries for the box and its preamps. The AR4i takes no power from the phone itself, although a mini-USB input is provided if your AAA batteries go down, and it will also charge the phone (albeit slowly). You’ll get about eight hours of recording out of the AAA batteries, though higher levels of gain will reduce that somewhat.

The right side of the AR4i is home to two balanced 3.5mm inputs for connecting the two included cardioid condenser mics in either a coincident stereo pair, or by pointing them in opposite directions, a dual mono configuration that works well for interviews. There’s a third balanced 3.5mm analog input jack on the left side, which allows the mics to be separate yet both aimed at a single sound source. In addition, any of the three balanced analog inputs will accept third party mics so long as they are either battery powered condensers or high-output dynamics; note that only two mic inputs can be used at one time. Given the right adapters and a strong output, one could connect almost any XLR microphone into the analog inputs, although the preamps’ gain is somewhat limited (from -12dB to just shy of -60dB) and will get noisy if pushed too hard.

Also on the right side of the AR4i, you’ll find four LEDs for input level monitoring -- three green and one red. These are easy to see in the dark, although with only four LEDs you’ll need to mind the input signal levels a bit more closely so as not to light the red LED. In the same position on the left-hand side you will find the level control for the headphones, plus both 3.5mm and 1/4” jacks for the headphone outputs.

The AR4i comes complete with the aforementioned handle, but it can also be used hands-free, since there are two tripod threads in the AR4i chassis that allow you to hold the device in either horizontal or vertical position. There’s also a hot-shoe mount on the top of the device for use when shooting video, where you can mount a light or other accessory.

The handle is cool, but the tripod mount is a real lifesaver. It reduces both handling noise when recording, and the possibility of dropping the whole business or accidentally knocking it off a table. I also found that, using the AR4i in landscape orientation, the bulge of the battery cover allows you to hold the iPhone in a similar manner to a compact camera. A soft carry case is also included, which has a separate side compartment for the included knurled handle so it won’t scratch up the other goods.

The case of the AR4i combines a metal inner chassis with a plastic outer shell. The small headphone and input level thumbwheels are a little fiddly, given the compact size of the product. Fortunately it is easy enough to avoid hitting them by accident once you’ve got the entire rig set up properly.

You will have to remove the phone from any protective case using the AR4i, but a screen protector should be okay (I don’t use one anyway). The fit is snug, and though there’s no audible click when the phone mates with the box, there’s no question that a connection has been made. The unit is designed so that the iPhone camera lens clears the top of the AR4i, allowing a video shoot with improved stability even if you’re not using a tripod. As for recording audio, the only noise comes from the preamps if they’re cranked to a high level.

Despite a 20 Hz - 20 kHz spec, the mics themselves are bright with little in the bass region, which one would expect from very small directional electrets. They each wear a little foam wind sock, which prevents light to moderate wind noise from being a problem; just don’t expect to hang them out the window of a moving car and not hear wind gusts.

The headphone amp can be somewhat noisy, and should be used only to confirm for real time monitoring and making sure that the signal path is functioning (that noise did not appear in my recordings). And while I usually look at the on-screen meters to check the input levels, it’s also nice to have the LEDs to do a bit of gain staging and avoid overs during recording.

When combined with Audiofile Engineering’s FiRE Studio or with the iOS version of Twisted Wave, I am liking the portability and control that I’m getting with the Fostex AR4i. The entire package is small and light, and very easy to use. So far the results have been more than acceptable, and I’m looking forward to trying some other mics with it once I return home. The Fostex AR4i carries a suggested retail price of $199 USD but can be had online for about half that. For more information visit www.fostexinternational.com.

November 01, 1999 15567
by Steve Cunningham The current crop of high-end voice processors are mostly analog units that combine a microphone preamp, a compressor, some EQ, and perhaps a de-esser. But when Danish audio manufacturer TC Electronic decided...
Read More...
© 1988 - 2023 Radio And Production, LLC
Go to Top