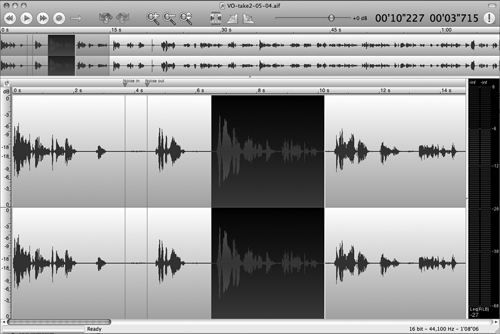 The brainchild of Parisian Thomas Thiriez, Twisted Wave is a comprehensive stereo recorder and editor that was first released in late 2007. When compared to current stereo and multitrack software products, TwistedWave’s user interface is closer to Audacity than to Audition. But what it lacks in eye candy it makes up for in speed and power.

First, the bad news: At this time there is no Windows version of Twisted Wave; it is a Mac-only product and it seems that it will remain so, at least on the desktop. However, there is actually a side benefit — Twisted Wave is available for iOS, which means it runs on both iPhones and iPads and is therefore an ideal candidate for creating a lightweight traveling VO kit. There’s even an online version of Twisted Wave that is currently in beta and has the potential to change the where and when for working voice actors; more on these later. And for those on a budget, there is TwistedWave Lite, which has all the editing features but lacks some of the file formats, and some advanced features.

But here’s the good news: TwistedWave is capable of recording at sample rates from 8kHz to 192kHz, and at bit depths from 8 to 32-bits. It will record and edit mono, stereo, and at surround formats from 3 channels (2.1) to 8 channels (7.1). Mind you, these channels will all be in one document and cannot be recorded separately. All operations except save and load are conducted in RAM, so the program is wicked fast. However, for that reason it wants as much RAM as you can provide, especially if you’re working with long files, since the entire file is loaded into RAM. The program requires Mac OSX version 10.6.6 or greater, and it does work on 10.7, both of which imply the use of Intel processors only. The only real consideration is RAM, where more is more. RAM is still reasonably cheap, and 8 GB will hold a lot of audio.

Not to be forgotten is TwistedWave’s insanely long list of useable file formats. Suffice it to say that if you can get your hands on it, TwistedWave can import and edit it. Ringtones (.m4r), Ambisonic Audio, Apple compressed (.caf), Windows Media Audio (WMA), whatever. The Lite version has a shorter list, but all the good ones are right there. Do note that TwistedWave will not record mp3 files directly, but certainly allows linear files to be converted.

HOW TO INSTALL IT

TwistedWave is available from the company’s website, or from the iTunes App Store (the TwistedWave Lite version is only available from the App Store). There is also a 64-bit version of TwistedWave on the company’s website, which is free if you purchase the full version. Installation is a simple matter of dragging the application to the Mac’s Applications folder, and the copy protection will ask for a serial number on first run (yes, there is a 30-day demo mode as well).

Once installed, the TwistedWave interface presents as a single window. Tool icons for zoom, navigation, fades, transport and location are arranged along the top. Below is an overview of the entire audio file with its own time ruler, while below the overview is the waveform view, including both time and level rulers, on the left and center, and a vertical level meter along the right side. That’s it, folks. Feel free to make that window as small or large as you like.

The first stop should be a brief visit to the Preferences window, where you’ll want to set up your gozintas and gozoutas. The input and output settings support all built-in audio functions including the built-in mic, as well as all Core Audio devices you may have plugged in to your computer. This is also where the Buffer Size can be set, which will affect the amount of delay heard in headphones during recording.

If you’ve installed the TwistedWave Remote app on an iPhone or iPad -- I can’t imagine why you wouldn’t since it’s a free download -- then another trip to the Preferences window will enable and find it, provided the device is on the same Wi-Fi network as the computer running TwistedWave.

Test Drive: Genelec 6010A / 5040A Powered Monitors and Subwoofer