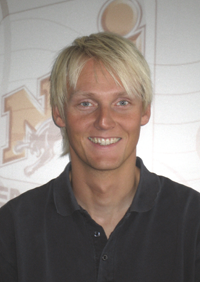 This month’s RAP Interview makes a first ever stop in Finland for a chat with Heikki Wichmann, the Production Manager at NRJ radio in Helsinki, the capital of Finland and the largest city in Finland with a metro area population of 1.3 million. As in many European countries, commercial radio is a relatively new thing, with 1985 marking the beginnings of commercial radio in Finland. The radio landscape is still evolving, and NRJ radio is staking its claim to a chain of commercial stations across Europe, including stations in Austria, Belgium, Ukraine, Lebanon, Switzerland, Germany, Denmark, Finland, Sweden, Norway, Bulgaria, Russia, New Caledonia, Réunion and France. We get a look at NRJ Finland and find out a bit more about our fellow RAPster behind the production controls, and be sure to check out some great audio from Heikki on this month’s RAP CD. While most of it is in Finnish, Heikki did throw in several cuts done in English!

JV: How did you get into radio, and what were some of the career stops you made along the way to NRJ Finland?
Heikki: I think my journey to “The Radio” was quite long and it started in the 1980s. I was interested in audio and sound when I was younger, and at home we got an acoustic piano. Well, I sold it and bought a sampler. At school I was involved in “technical group,” which took care of drama and other happenings in our auditorium. We used my sampler and some open-reel tape recorders to produce sound effects for the plays. So I can say I started my sound producer career at that time.

Commercial radio is quite a new thing in Finland. The first commercial stations started in 1985, and this year the industry celebrated its 25th anniversary. At the time I was in school, I worked part-time at an audio company. We built and designed loud speakers and other audio systems. It was there that I got lots of knowledge in audio technology.

The years passed and I was involved in audio production and other audio related jobs in many ways. Then in 1997 I got a phone call from a friend of mine who was the CEO at a small radio station in Helsinki. He asked me if I was interested in a sound-producer’s job. It took me no time to say, “When can I start?” The station’s name was “U-103” and the format was “Golden.” I worked there from 1997 to 1998.

In 1998 I got another phone call. My friend called me and asked if I was interested in working at an audio equipment retailer which was about to open soon. Once again, my answer was “yes.” I started immediately but I didn’t forget about radio production. I worked there for a year selling mostly studio equipment. I learnt a lot there and made many useful contacts.

And then another phone call… the year was 1999. This was the same CEO from U-103 who called me and asked if I was interested in working at a new radio station in the Helsinki area. I took the challenge. My job was to build the whole radio station’s studios and other systems, including the transmitters, antennas and such. We had three studios and nine transmitter sites. When I got there it was only an empty industrial hall, so it kept me quite busy for a while. The station’s name was “Sävelradio.” I worked there from 1999 to 2006 taking care of sound production.

Sävelradio was bought by Radio Nova in 2004, so I got involved in Radio Nova’s sound production as well producing two different formats. Sävelradio’s format was “Schlager” and Radio Nova’s is AC.

On November 2006 I got another phone call from a colleague who was working at Radio NRJ. So again I said “yes.” And since then I’ve been working here at Radio NRJ Energy as Production Manager taking care of the station’s sound-production. NRJ’s format is CHR and we just got another license for a radio station called “Radio Nostalgia,” which is about to be launched early 2011. Radio Nostalgia plays music mostly from the 1950s to the 1990s and is an adult oriented station. So, again it is one man, two formats.

JV: When you set out to build the stations in Helsinki in 1999, how did you go from sound producer to transmitter engineer? Did you hire some RF engineers, or did you teach yourself what you needed to know about transmitters and antennae?
Heikki: I’ve always been interested in technical things. I had a CB base station when I was a teenager, so playing with antennas and transmitters was somewhat familiar to me. But I did hire a company to do the technical part, the engineering stuff. Actually, building an RF transmitter site is quite easy when you know the basics.

JV: What kind of radio ratings system is used in Finland, and how does NRJ rate compared to other stations in Helsinki?
Heikki: In Finland we use a diary based ratings system. And all stations use the same system. That kind of system is better for the government owned stations, and YLE is the biggest player here having about 50% of all listeners. So it is clear they don’t want to change the system. We know that a system like the Arbitron system is better, or more realistic for commercial stations.

JV: Are there any special regulations or codes in place regarding commercials in Finland? For example, in Canada, they have a Code of Advertising Standards that facilitates self regulation of the things you can and cannot say in a commercial. There is obviously some government agency regulating commercial radio in Finland. I’m just wondering if they extend their regulation into the content of commercials, as well as the usual things like transmitter power, licensing and such.
Heikki: There are several regulations and agencies, especially in medical commercials. There is an agency called the Finnish Communications Regulatory Authority, or FICORA, who is monitoring all radio stations in general for things such as transmitter power, licensing, the amount of speech, commercials in general, and so on. The Finnish Medicine Agency, FIMEA, takes care of medical commercials. For example, if I want to produce a commercial advertising aspirin, I have to send the script there and then the audio file and they will check to see if it is okay.

JV: Commercial radio is still relatively new in Finland. Is it still changing and evolving? Are companies still buying and selling stations, trying to get as many as they can?
Heikki: Yes it is changing. Basically in Finland, companies cannot sell station licenses, and the business is strongly regulated. All commercial licenses are ending at the end of 2011, and the government is giving out new licenses for seven years starting from 2012. That means we have to apply for a new license for NRJ.

JV: What are the ownership limits are in Finland? How many radio stations can one company own in one market?
Heikki: Basically, it is not limited, but the authorities usually give only 2 national licenses for a single company. They want to keep it a competitive business.

JV: What are your responsibilities as Production Manager for NRJ?
Heikki: Well, I take care of all the audio production here. I write some text, record, edit… pretty much all things that are related to audio production. Our morning DJ does produce some elements for his show and that helps me a lot, but for the most part, I am producing everything else.

JV: You speak English well, but English is not a major language in Finland. How did you come to speak English?
Heikki: Well, it is said that Finland is the most American country in Europe. You hear English everywhere on TV, radio, internet, so you learn it by listening to it.

At school we have to study languages, and as you may know, Swedish is the second official language in Finland. So we have to study Swedish. But then we can choose several other languages to study. I think now you can chose up to six or seven different languages. Many years ago when I was in school, I chose Swedish, English and German as my languages.

JV: How would you describe your style of production or your production philosophy with regards to imaging?
Heikki: That is a hard one to answer, but I guess I just try to find a feeling or emotion about the piece that feels right, and then I just follow that feeling.

JV: Was there anybody in your past that influenced your style of production, or would you say that you developed your skills without much outside influence?
Heikki: I don’t think there was any specific person that influenced my style. I think I’ve taken many small influences that were around me and tried to do my own thing.

JV: Tell us about the production studios at NRJ.
Heikki: We have two small production studios here and one speech booth. Sound production doesn’t need to be done in a big room. Actually you can do all the magic on a laptop equipped with good headphones. We use Genelec monitors in all our studios. It’s good to have a standard sound in the production and on-air studios. I use a Rode NTV tube microphone. I think it gives a very neutral and open sound. My preamp is the SPL Channel One. It also sounds very neutral. My mixer is the T.C. Electronic StudioKonnekt48. It is used mainly for monitoring, talkback and signal routing.

JV: Do you have some favorite plug-ins that you use regularly?
Heikki: I mainly use the Waves plug-ins -- mostly L3, L1, ReQ6, Rverb and Multitap delay. I don’t like to process voice using a mess of plug-ins. I think it gives it an unnatural sound.

JV: Are you doing any freelance work out of the home studio?
Heikki: Not very much. Sometimes a friend will ask me to do some small things, but I’m not producing freelance in general.

JV: What multitrack DAW software do you use at NRJ and at the home studio?
Heikki: I use Wavelab both at NRJ and at home. Many years ago I used Cubase and I still use it for some projects. I had ProTools, or ForFools, ProToys or whatever you call it, but it was way too slow to work with.

JV: How much creative freedom do you have when you are given a promo or some imaging sweepers to produce? And do you write the promos or does your Program Director write them?
Heikki: I have very much production freedom. My opinion is that the most important thing is to keep the listener on your mind when you are making decisions about what kind of sound you are producing. Our PD writes the promos but mostly we write them as a team. It is always good to have more opinions and find the best one.

JV: Any final thoughts for our readers?
Heikki: Think about your listener, find the feeling and start producing!

March 01, 2008 6893
by Steve Cunningham If you do any type of remote recording, at some point you will need a noise reduction program. Hum, buzz, air conditioner noise, general room noise — any of these will give you fits if you need to clean them...
Read More...
© 1988 - 2022 Radio And Production, LLC
Go to Top