As recently mentioned in this column, the DAW race continues to heat up in the past half-year or so. There are new entries like Cocko’s Reaper, along with new versions old favorites like Pro Tools 9 that are more competitive because they have to be; decoupling PT from its formerly required Avid hardware could only have been a competitive move.

Adobe has made a competitive move of its own. They are in the process of giving some long-time users of Audition that which they have clamored for -- a Macintosh version of Adobe Audition. Rather than release it fully-formed at retail, Adobe has instead decided to turn loose a “beta” version to the general public. It is free, carries no dongle or serial number, and promising in some areas while disappointing in others. Nevertheless, it’s important and worth a preview look-see.

Normally I don’t like to write about software that is not yet ready for retail. The obvious reason is that it is beta software, and can it can be assumed that it has a few bugs as well as design issues that may change in response to those issues. Examples include features that appear or disappear between versions, and the various bugs that need fixing. Having said that, there are a couple of very good reasons for reading this preview before the software is fully cooked, so to speak.

First and foremost is the notion that if those of you who read this actually go and download the software, you may discover features and functions that don’t exist but should along with others that need to change. After all, many of you have used Audition since it was Cool Edit Pro, and Cool Edit before that. You know what works for you, and you have an opportunity to tell Adobe what you need that isn’t yet in there. In doing so you have a chance to make the product better and more suited for your workflow. That’s pretty darned cool.

But what is more important is that the development of Audition for Mac appears to be running in parallel with Adobe Audition 4 for Windows; even the splash screen says it’s version 4. According to Adobe, the two products share a common codebase, which implies two things: First is that this new Mac version acts as something of a preview for the version 4 Windows product; and second, that Adobe intends to develop the two products in parallel going forward. If the company accomplishes the second objective then it may end up garnering a significant share of the Mac market, making it profitable to continue development. 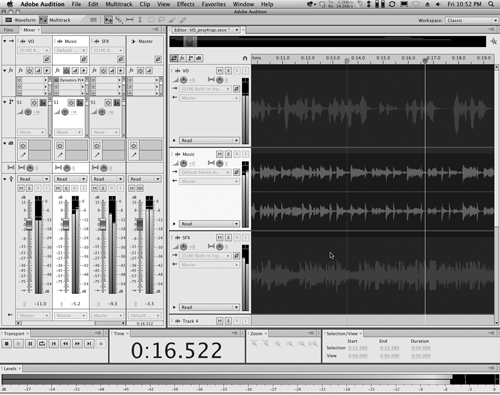 The Macintosh version of Audition makes no effort to run on older machines. It wants to see a Mac with a multi-core Intel processor (a Core2 or better), along with OSX 10.5.7 or 10.6.x (that’s Leopard or Snow Leopard to you Windows folks). So anything with a G5 or less is out, and it’s clearly designed to take advantage of Snow Leopard’s feature set. However, Audition is still a 32-bit program, which means it cannot use more than 4 gigabytes of RAM. Adobe says they look forward to developing a 64-bit version in the future, but not today (and I’d assume that will be true for Audition 4 on Win 7 as well). It needs at least one gigabyte of RAM (2+ for HD video work), 2 gigabytes of hard disk, a 1280x800 display, a Core Audio-compatible sound card, and Quicktime 9 which is the default install in Snow Leopard. Those are not ridiculous requirements, but they ain’t foolin’ around, either.