Test Drive: The Reaper Grows Up

It’s been just over two years since we looked at Cockos Reaper, a multitrack recorder and editor software program. During that period, the company has updated the software about 150 times, taking it from version 1.86 in the previous review, up to version 3.71. That’s not a typo -- there have been some 150 revisions in just over two years! The overall buzz on the street has some audio folks abandoning their Pro Tools rigs as well as other editors for Reaper. It’s not hard to understand the reasons -- besides being ridiculously cheap, Reaper runs on both Windows and Mac platforms, in either 32-bit or 64-bit mode. But the important question for you, dear reader, is this: Has the most cost-effective multitrack editor currently available finally grown up? Is it suitable for radio production, and moreover, is there any reason to abandon one’s long time choice for this relative upstart? Let’s see if we can find an answer. 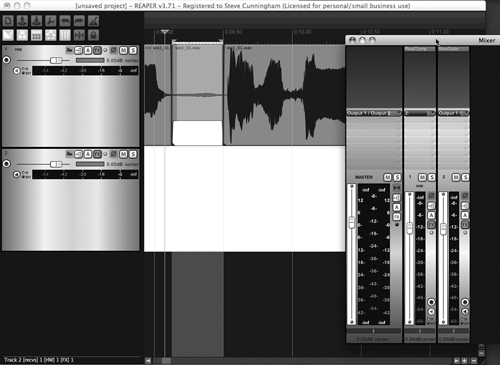 First introduced in 2005, Reaper comes from a small team of developers based in San Francisco. Between them, these guys have created a respectable number of developer and geek programs, as well as a surprising number of audio plug-ins (more on those in a future review). But clearly Reaper is their flagship product. The system requirements are as modest now as they were in the beginning. The 32-bit version runs on Windows 98 or ME (both with limited support, however), Win 2000, XP, Vista, Win7 or WINE. The 64-bit version works on XP, Vista, and Win 7 x64, and of course requires 64-bit drivers. On the Mac side, it runs on OSX 10.4, 10.5, and 10.6 (the 64-bit Mac version is in public beta, and also requires 64-bit drivers). It likes ASIO drivers and seemed to work with every interface I could find to throw at it. Supported sample rates run from 8 kHz to 192 kHz with a capable interface, and bit depths from 8 to 24-bit in PCM linear, 32 and 64-bit floating point, and even 2 and 4-bit ADPCM (for IVR phone use, I suspect). Formats include WAV, AIF, MP3 via LAME, OGG, and a couple I’ve not heard of. In other words, it will record and play back just about any format you can think of.

The maximum number of tracks in Reaper is 64, but these can be divided in a number of ways. You see, what sets Reaper apart from other programs is that many of its functions are open-ended, allowing the user a great deal of control over how they work. Most important for the non-technical user is the fact that there is only one kind of track or channel in Reaper, which can carry multiple streams of audio simultaneously and route them to any other audio stream on any other channel. This means that you determine whether a track is an audio track, an effects return track, a group track or whatever by how you connect it up. Plug-ins can then be applied to separate MIDI and/or audio streams within a given track to create complex matrixed effects that in other applications would take multiple tracks to implement.

The package comes with a nice selection of audio processing plugs, including dynamics, EQ, a convolution engine, an automatic pitch-corrector, reverb and echo, and an insert utility to incorporate hardware into the software chain. All these have sophisticated automatic delay compensation, and you can reduce native CPU load further by offloading specified effects chains to other computers on a network using the included ReaMote software. If the standard plug-ins don’t do what you want, you can actually script your own FX chain via a built-in scripting environment, debugging and recompiling your code while Reaper is running. Further mixing power is provided by the innovative Parameter Modulation function, a kind of adjunct to the dynamic automation system that can control any effects parameter on one track according to signal levels on another. The look and feel of the program can be changed extensively by virtue of interface settings and skins, collectively known as Themes, while keyboard-triggered shortcuts called Actions and screensets are available to speed up your workflow as well.

The point is that Reaper is a highly capable multitrack audio recorder and editor, with nearly all the features of the Big Guys, and including some that production and VO folks will never use (think extensive MIDI recording and editing functionality). But do all those features add so much to the complexity of the software that it becomes hard for mere audio mortals to use?

In an attempt to quantify how easy (or not easy) it is to begin doing useful work in Reaper, I’m going to describe the precise steps involved in recording and editing a simple voice over project from scratch, and from the first boot. Imagine you’re a non-technical voice talent-type, working up an audition for your agent in your home studio. You’ve just downloaded the software and are about to have a go. The demo is not crippled in any way, so you have access to every function and feature. Will Reaper get the job done for you, without having to call tech support? Let’s try it.