Test Drive: Genelec 6010A / 5040A Powered Monitors and Subwoofer

But eventually I did want to hear that last octave, and that’s when the 5040A sub showed up at the door. It’s an odd-looking beast, resembling a throw-pillow on steroids or some such, but in reality that pillow contains a down-firing 6-1/2” subwoofer with a cast-aluminum dome. Standing about 10” high and 12” in diameter, the 5040A weighs just under 14 pounds. Inside there is a 40 W internal amp driving the woofer, and producing a frequency response that is rated from 35 Hz to 85 Hz and will produce 98 dB SPL (played in half space at one meter, using short term sine waves). 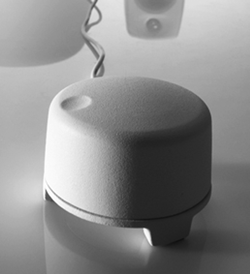 All the 5040A’s controls and connections are on the bottom. It incorporates a full bass management system for 5.1 surround, including a proper LFE input. A stereo mini jack and an RCA pair accommodate the front channel input, and both can be used simultaneously. All other inputs and outputs utilize RCA jacks, save for an additional 1/8” mini jack for the strange wired volume control supplied with the 5040A.

This control is finished in a die-cast housing shaped exactly like the 5040A in miniature. The sub is designed to take advantage of boundary effect from the floor and nearby walls, but it has the same “bass tilt” controls as does the 6010A.

Connecting the 5040A to the 6010As as a simple 2.1 system was easy enough, apart from the fact that you have to up-end the sub every time you need to adjust a control. Also, the volume control is too cute by half -- while there’s an indent so you can rock it like a scrub wheel, there are no position indicators so I had to put it out of the way lest my bass balance change. The only other issue was the somewhat unsightly group of cables growing out from under the sub like so many roots, but I suppose that’s to be expected. 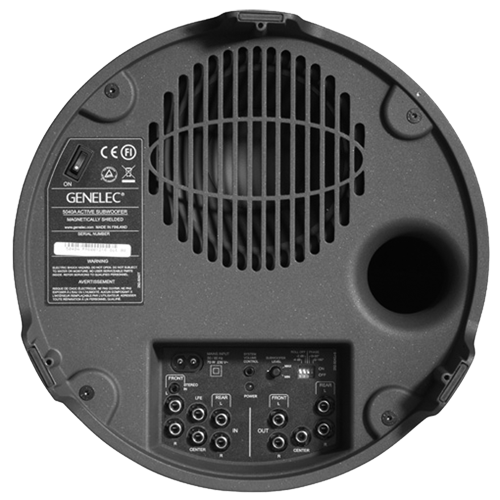 I very much liked having that extra octave or two of music, although in the end I dialed the sub level down much further that I would have expected to, given the sharp drop-off in low end of the 6010As. Do you need to consider the sub for radio production work? No, I don’t think so... there’s just not that much useful information below 70 Hz, save some of the explosions and zaps that are falling out of favor anyway.

I’d say I’ve had a good month. I played a little poker, got a very nice set of small monitors for my trouble, and the charity event raised over $7,000 for the Sound Art, an organization that provides a musical education in schools and community centers in urban LA... always a good thing.

Are the Genelecs appropriate for your production room? That depends on whether your budget can handle a pair of small speakers that street around $700 in the US. If you decide to get the sub as well, you can add another $600 street price to the package. I don’t think I’ll keep the sub, but the speakers are totally radio-production-worthy, and they are Genelecs. Check ‘em out.

The Genelec 6010A speakers carry a US suggested list price of $375 each, while the 5040A subwoofer’s suggested list is $750. For more information worldwide, visit www.genelec.com.

Speaker boundary effect is defined as the increase in bass response you get from placing a full-range loudspeaker on or very near a large flat surface -- a floor, wall, or ceiling. The flat surface acts as an extension of the speaker cabinet as the speaker and the flat surface acoustically couple with one another. This property increases the total bass output by 3 dB per surface. Allow me to illustrate.

You can try a simple experiment at home with one of your two stereo speakers, connected to your amp with a long speaker cable so you can move it around the room. Take that one loudspeaker and put it on a stool near the center of the room (disconnect the other so you hear just the one sound source). Listen to a piece of music you know well, and you should hear a reasonably accurate representation of that speaker’s ability to reproduce the music, since there are no large surfaces nearby to change the response. This is known as the free field response, and the speaker is said to be playing in a free field (as in no walls). Now set the speaker on the floor and listen again.

You should hear a slight increase in the bass level -- the actual increase is +3 dB -- that comes from playing the speaker in what’s called half-space. Next, put the speaker up against a wall while still on the floor and listen. You should hear a +6 dB increase in the bass, and since there are now two coupling surfaces the speaker is said to be playing in quarter-space. Finally, put the speaker on the floor in a corner, which will give you +9 dB of bass response as the loudspeaker plays in eighth-space coupled to three surfaces.

One way to improve the sound of your production room is to heed the lesson of speaker boundary effect. Try moving your speakers away from the back wall and see if that doesn’t make your productions sound less muddy. Keep in mind that if your speakers are sitting on your mixer’s meter bridge, the mixer surface itself will couple and add to the bass increase. This is why in most music mastering studios the monitors are on spindly stands, away from the back and side walls, in an effort to get them in close to free space.

March 02, 1991 19983
Appropriately named a Master Dynamics Controller (MDC for short), ART's new MDC-2001 packs all the dynamics processing you could want on one neatly designed, single rack space unit. You get what you would expect from a "dynamics...
Read More...
© 1988 - 2022 Radio And Production, LLC
Go to Top