It’s only been about a year and a half since we last looked at Sony’s Vegas Pro 7 audio (and video) editor (see the April 2007 issue of RAP). I usually avoid re-reviewing a piece of software that quickly, particularly since the past few updates to this venerable program have seemed juicier on the video side than on the audio side. But while I wasn’t looking, Sony added something that has been missing for years to what has always been a competent and friendly audio editor.

Vegas now has a mixer.

Wait, I know, it’s had a mixer all along, but the most important mixing elements like faders and mutes were integrated into the Track display, and the less-important, but no less useful, elements lived in their own separate Mixer window. That never cut it for me. No, I’m talking a real mixer, that looks and operates like an analog mixer with faders and knobs. You remember those, don’t you? Vegas 8’s new Mixing Console window has all the parameters you’d expect to see, organized into one window so it’s all visible simultaneously. So you can set up and perform an actual mix without guessing, right? 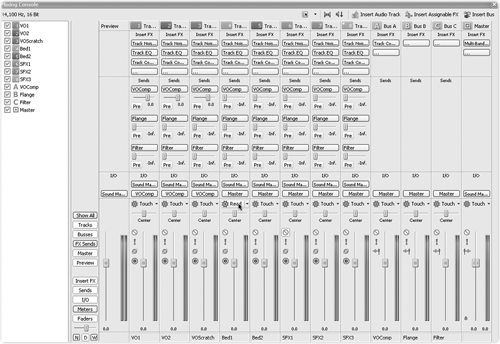 First, it’s not all beer and skittles in the requirements department if you use an older version of Windows. Vegas 8 now requires Windows XP with Service Pack 2 at a minimum, which means it’ll no longer support Windows 2000 or a non-upgraded version of XP. But it also supports Vista, which should make somebody somewhere happy (I just don’t know who). I’m still not ready to take that particular plunge, nor are most people I know who cut audio for a living on Windows. But Microsoft doesn’t sell XP at retail anymore, and eventually we’re all going to have to go there, so I suppose it’s a good thing that Vegas is ready for it even if I’m not. Actually, the same goes for XP Service Pack 3; I heard enough horror stories about audio problems with SP3 that thus far I’ve managed to avoid it, and none of my appendages have fallen off. Yet.

Otherwise the requirements are still about the same as they were for version 7. Vegas needs a minimum 1GHz processor, although 2.8GHz is recommended for video stuff, a gigabyte of RAM and about 200MB of disk space, and Microsoft’s .NET Framework 3.0, which is included. Fine and dandy there. In total, the requirements are not serious for audio editors — after all, this is a program that is designed first and foremost to cut video (and HD video at that), so since all we’re doing is cutting a bit of little old audio, we should do just fine.

If you buy the software from Sony’s website you can choose to buy physical media or a download version of the product. As an impatient guy I always opt for the downloadable version, which also feeds the cheapskate in me by being about fifteen bucks cheaper. Assuming you do the same, you might as well download the free and updated Sony Media Manager software package at the same time, and install it as well (Media Manager improvements are discussed below). You’ll also have an opportunity to download and install Sony’s updated DVD Architect version 5 software, included when you buy Vegas 8, but be advised that as before it’s still a DVD creation package that will give you nothing for CD work. Save the disk space and skip it... you can always go back and download it later.

Vegas Pro 8 is otherwise pretty much the same as version 7. It still does 24 bits and 192kHz sample rates, and still includes lots of audio effects. It will still burn an audio CD from inside the program, and still does high-quality time-stretching. In other words, it’s the same.

So for those of you who are Vegas heads or read the previous review of version 7, rest assured that little of what you know has changed, and I’m not going to repeat myself. Instead, let’s focus on what is new and improved. That’s the Mixing Console.

July 01, 2003 6227
by Steve Cunningham Left to my own devices for this month’s product review, I found myself compelled to look at a software plug-in whose sole purpose is to twist, mangle and otherwise brutalize audio. While this plug includes...
Read More...
© 1988 - 2022 Radio And Production, LLC
Go to Top