To give RX a good workout, I decided to use it on a 27 minute business presentation that I’d been asked to master to CD for a client. I could just as easily have used interviews I’ve been recording for a radio show, but this business presentation has many more of the prerequisite problems. First, it was recorded badly with some nice ground-loop-cum-bad-cable humming and buzzing underneath, combined with what sounds like room AC. In addition, there was a nice clipped section and a couple of hits on the mic stand that had to be dealt with. 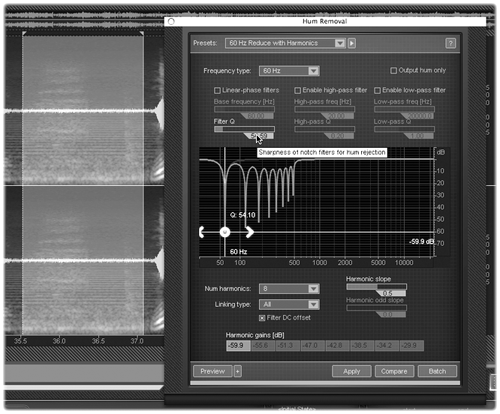 First things first. Getting rid of the 60 Hz hum is a job for RX’s Hum Removal function. As you would expect, Hum Removal applies a narrow and deep notch filter at 60 Hz — or 50 Hz or anywhere else — and adds other filters at up to eight upper harmonics of that fundamental. You can experiment as I did with different settings to get the best results, using the Preview button to hear the repair before you commit to it. Nearly all the modules have a Preview function, excepting those that require too many CPU cycles to allow playback (like Spectral Repair). The “60 Hz remove with harmonics” preset did a nice job. 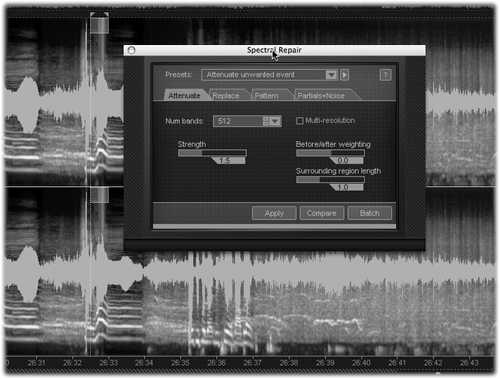 While the hum was gone, there was still a significant buzz left over from what I believe was a ground loop. Time to try the Noise Removal function, which works in the typical “train and apply” method. I selected a small region where the noise was clear, a little over a second’s worth, and hit the Train button. RX quickly built a graph of the noise sample, and I then selected a larger region that included speech. I set the reduction to 18 dB and hit the Apply button, which brought up a progress bar. When it finished, the noise was inaudible, and I could not hear any artifacts at all, even on the echo tails from the large room. Superb, although not quick — when I processed the entire 27-minute file, RX took about 8 minutes to remove the noise. 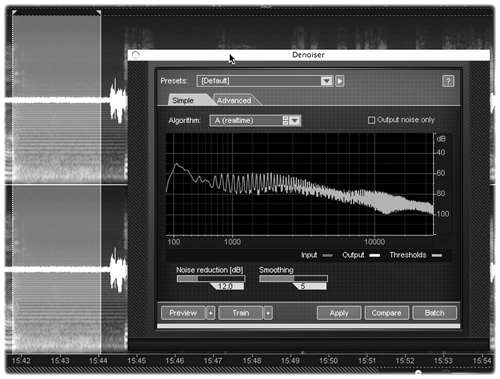 I also had to deal with one section where the speaker got a bit excited and chose to eat the mike. This resulted in about two seconds of distortion that sounded natural enough in context, but really bothered me. I selected the region and brought up the Declipper module. First you click the Compute button on this bad boy, and it will show you where the clip point lies so you can set the clipping threshold and makeup gain appropriately. Again, this takes a bit of trial and error, even when working from the presets, but the results are surprisingly good. This guy definitely beats the Sony clipping plug-in that I have been using — the results were nearly inaudible with a very slight drop in the high-frequency content where the clipping was before. 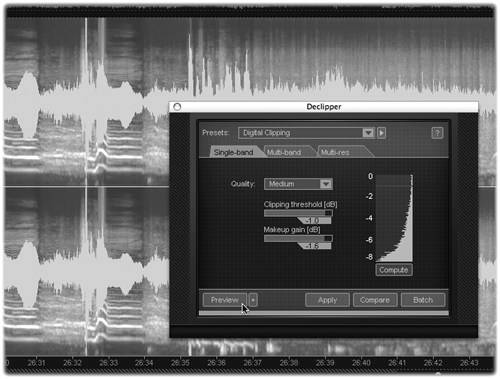 I used the Spectral Repair module to eliminate a couple of instances where the speaker smacked the mic stand. I used the time-frequency selection tool to isolate just the stand noise, and voile, it was gone, leaving most of the rest of the audio untouched. I’m a fan of spectral editing, and like it in Audition and Wavelab, but I like it here even more. While the final edit did extend a little beyond the selection, it seemed to do so to smooth the edit, and the result was better than acceptable if not perfect. Spectral Repair was even able to repair a short dropout during a word, by interpolating the signals around the dropout and filling in the gap. Again, it was not a perfect repair, but it was nearly inaudible when played back at speed.

Finally, RX includes a four-band parametric EQ and a Gain module, both of which are accessible from the Process menu. There’s also a standard real time Spectrum Analyzer available in the View menu, for double-checking your work.

A BIG BATCH OF WHUP-NOISE

Some of the functions take time to process the audio, particularly Spectral Repair if you ask it to replace an offending sound with something similar to those around it. For that reason RX features a Batch function. As you work with each of the modules, you can click on a Batch button that adds that operation to a list. Once you’ve finished tweaking, you can adjust and reorder the list, add or remove items, and then hit Run. The Batch will process your audio file as you’ve specified, and Bob’s your uncle — you can go get a coffee, and it will be done when you return.

RX is available in two versions: a regular version, and RX Advanced. The Advanced version adds two flavors of dithering, 64-bit resampling, and more manual control over de-clicking, de-clipping, de- noising, and spectral repair. It’s all good stuff, and if you’re into serious forensic audio then you’ll appreciate it. But if all you want is to clean up remote recordings or damaged mp3 files, the regular version will work just fine.

iZotope’s RX is a standalone software application at this time. The company is working on plug-in versions of RX, and they’re planned for release “in early 2008.” The good news is that if you own the standalone version, you get the plug-ins for free when they’re out.

While the plugs will be more convenient, I am somewhat concerned that given the heavy CPU load generated by the standalone RX, the plug-ins may overpower my Pro Tools LE and Audition rigs. Only time will tell, but in the meantime I like working in the standalone app — I usually expand its window to cover most of the screen so things are easy to see. I don’t know if I’ll be able to stretch the plug-in interface to be as wide as I can the standalone, which is a must for me. On the other hand, a plug-in version would complete my work on this and other projects that much faster, since all I’m missing is a compressor and fades, ya know?

Okay, I’m impressed. I’d like better documentation and labels that were closer to white than to gray. But RX comprises the best noise reduction suite I’ve yet used, the presets are useful out of the box, and it kicks butt on anything under a grand (and on several products that cost more than that!) Yes, processing takes time, but given the nearly flawless results, I can wait a minute. Steve sez check it out.

September 01, 2001 19332
by Steve Cunningham All-in-one hardware audio workstations are popular among small recording studios, production companies, and bedroom musicians. They’re also used by some radio production types who like to work at home, after...
Read More...
© 1988 - 2022 Radio And Production, LLC
Go to Top