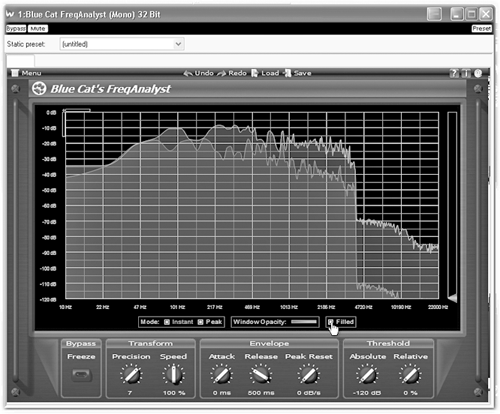 For those of you who are not working on deadline and have time to experiment, you can design and apply new “skins” to most any of Blue Cat’s effects to change the look of the plugs, and the website is home to a wide variety of user-created “skins” to get you started. Now I have to say that the whole business of “skinning” in software has always seemed silly to me, until I looked around on Blue Cat’s website and realized that some skins present a subset of the total available controls. I immediately applied a nearly control-less “skin” to FreqAnalyst, since I seldom fool with the knobs once they’re set. That’s not silly at all. 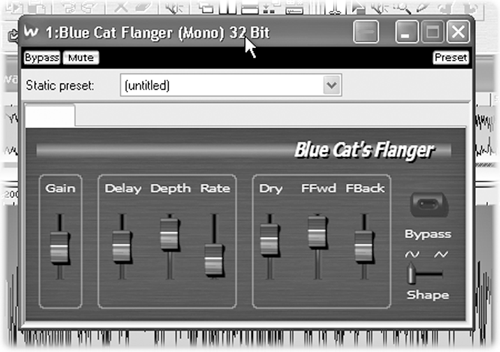 All in all, you’ve just downloaded a set of highly useful, clean-sounding plug-ins with a few extra tricks up their collective sleeve, at a price that would even make the PD happy. You didn’t download them? What on earth are you waiting for? 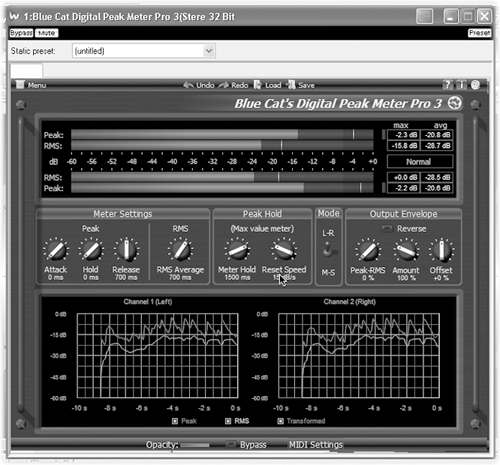 NOT FREE, BUT INEXPENSIVE

Now that you’ve got a feel for what these wily Frenchmen (and perhaps women) are capable of, let’s look at a few of their retail offerings, all of which are in the $59 to $129 price range (even less if you buy in Euros).

Eighty nine bucks will get you the FreqAnalyst Multi real-time spectrum analyzer, which allows you to display frequency analysis curves for up to 16 tracks simultaneously in one window. By installing the plug on multiple tracks, each instance of FreqAnalyst Multi can generate up to 12 different analysis curves, which can then be sent to a single data-bus shared between all active plugs via a Routing function and associated button. This is the process that allows you to compare frequency plots on multiple tracks.

The 12 different curve options on FreqAnalyst Multi represent instantaneous, peak and averaging options for any one of four signals on a stereo track (two individual channels, their average or the higher of the two). Knobs along the bottom of the window control the analysis algorithms, and the plug-in can be switched between conventional stereo, mono and M-S modes. This plug assumes that you know the difference between an averaging display and an instantaneous peak display and what each shows you (hint: an averaging display shows volume the way our ears hear it). But unless you actually record M-S in the field, you’ll likely have little use for that specific functionality. What is useful here is the ability to see which tracks are stepping on each other from a frequency standpoint, which helps layer sounds by frequency band so they can all be heard, and avoid low-mid muddiness. In any case, it’s an unusual and useful plug.

$129 USD will get you Blue Cat’s Dynamics, a feature-rich compressor, limiter, gate, and expander. With the exception of multi-band capability, it offers nearly every form of dynamics processing there is, including simulated VCA and opto compression and true downward expansion. Dynamics has a side-chain input that can be filtered and connected via MIDI to the aforementioned free Gain plug-in for true side-chaining from another audio track. The plug makes available a variety of stereo linking modes, and detection can be set to peak, RMS or anywhere in between. Interestingly, you can actually apply two separate dynamics processes simultaneously; the Upper Curve is a conventional compressor that applies gain reduction or expansion only to signals that exceed the threshold, while the Lower Curve applies gain changes to signals below a threshold, typically for downward expansion effects. Missing is a look-ahead feature and an auto-release function, but these are minor omissions at this price level.

The Dynamics plug-in makes good use of Blue Cat’s “skinning” feature. By default, you see the Global skin, which displays all of its controls. However, you also get an assortment of other skins with it that show only a subset of the features. If you want to use it as a gate, for example, you can choose a skin that displays only the relevant controls for gating. My only significant complaint is the scaling of the transfer function graph. It’s difficult to apply two or three dB of compression and gauge the results on a display that covers 60dB of level changes.

Since most popular editors now support side-chaining properly, I’m not sure that the idea of doing it via MIDI will appeal a lot of folks, but there could nevertheless be some interesting uses for the MIDI data that can be generated by this plug-in. Opening up the Global Settings page reveals a fairly long list of variables that can be converted to MIDI Controller data and sent to other plug-ins, or recorded to MIDI tracks. Setting these up so that you get a usable range of values is not trivial, and is an area where the manual could be more helpful. But with some trial and error it is possible to obtain a MIDI representation of the dynamics of your track. This is very cool, although limited by the fact that stereo audio generates dynamics data from one channel only, and that could reduce its usefulness to some extent.

Blue Cat’s Dynamics doesn’t have a lot going on in terms of character, but that is not necessarily a Bad Thing. What is does have that is attractive to me is the ability to apply both conventional compression and downward expansion at the same time, which is useful if you have a recording with a wide dynamic range and a lot of background noise, for example. But for the price this is a versatile and powerful Swiss Army Knife of dynamics plug-ins, with enough controls to squash the daylights out of a voiceover track, and do it with distinction.

Well, there isn’t a great deal of true documentation, but there are a large number of step-by-step tutorials, available on the company website, to make up for it. Some of Blue Cat’s plug-ins are quite complex, but they share common labels for functions, and the displays on each are arranged in a like manner with displays on the top and knobs along the bottom, for the most part. As a result, I found it quite easy to get around the different processors. However, the metering and analysis tools can be difficult to fathom, and more information is needed if you want to really make sense of what you’re seeing. Fortunately, there are some nice tutorials on the web site, but some of these plug-ins are pretty deep, and it’s not always easy to find out what the parameters do through trial and error.

As mentioned, all Blue Cat plugs run on XP and Vista using a PC with as little as 512MB of RAM and a 1GHz Pentium processor (although more is always better), and they present a light load to the CPU. This means you can run more of them, per track and in total, and makes up for some of the features that are missing compared with competing products.

Blue Cat have many more plugs than I have space to review. In particular, I’d urge you to check out their retail parametric EQs, all of which feature 40dB of boost and cut and up to seven bands (the seven band parametric retails for $99). If you’ve recently come into money, you can actually buy the whole shootin’ match — everything they make — for $999 USD. Healthy, application-specific bundles come in as low as $169. They’re all clean-sounding, they’re light on the CPU, they’re cheap, and you don’t have to speak French. What’s not to like, mon ami? Steve sez check ‘em out.

September 01, 1997 11484
by Jerry Vigil In a world full of digital workstations to choose from, it’s a pleasure to come across the Orban Audicy. Like its predecessor, the DSE-7000, the Audicy is a workstation designed for radio production first. Radio...
Read More...
© 1988 - 2022 Radio And Production, LLC
Go to Top