Welcome class, synth school is back in session. When last we met, I was explaining how oscillators and samples are the basic sounds used by the synthesizer to create an entirely new sound. They can be a waveform generated by the oscillator, a noise generator, or in the case of sampler/synthesizers, it may be a sampled waveform which is than manipulated. With some keyboard synthesizers, the "sampling" can be done on the fly via a mic plugged into the input (think vocoder). Whatever flavor you use, one or more of these base sounds is mixed together to begin creating an entirely new sound. 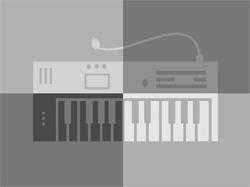 In some cases, that might be enough to create the sound you’re listening for. Many hit songs of the late ‘60s and early ‘70s were filled with buzzes and beeps that were little more than basic analog waveforms like the sine, square and others. But as the years have gone by, our audio palette has developed to the point that we expect even unreal sounds to be thicker and more complex. That’s not to say that you cannot make a complex sound with oscillator or simple sample waveforms only. You may remember when we talked about the nature of sound when this series began, and how all natural sound is created by a group of vibrations (or waveforms) of different speed and duration. Obviously, if you have enough waveform generators available, each tuned to specific tones, speeds and durations, you would be able to reproduce any sound. But since many synthesizers have 3 or fewer oscillators to play with, sound designers rely on other tools to shape the few raw sounds they have into the sound they’re looking for. The tools change depending on the type of synthesis, so let’s pick a type to begin with and run through its tools. And the winner is… Subtractive Synthesis!! And the first Subtractive Synthesis tool we’ll look at is one you’ve probably been using for years, under an assumed name…

The tool I’m talking about is a filter, which is used to, well, filter out selected frequencies or groups of them. Sound familiar? It should if you have messed around at all with EQ. An equalizer is a filter, which deletes or boosts selected frequencies (didn’t know you were already playing with synthesis, did you?). In subtractive synthesis, you’ll find high-pass and low-pass filters like an EQ unit, often with a resonance tool to boost or enhance the cutoff frequency. Some filters even create their own waveforms, or self-oscillation, when the resonance is cranked up high, adding another base sound to your recipe. You may find other more exotic filters, like comb or formant filters, but all of them serve basically the same purpose: take a frequency-rich sound (oscillated, sampled, whatever), and pull specific frequencies out of it, to reproduce another sound.

Again, oscillators and filters are great for nice, basic tones, but without modulation, you’re stuck with cheesy old toy keyboard sounds. Modulation is the act of routing your filtered sound through a tool, which again alters the performance of that sound. Modulation can come in several flavors, but the two most common are the low frequency oscillator and the envelope.

You might think that something called a low frequency oscillator should be at the beginning of the sound design recipe, but actually an LFO isn’t designed to be heard on its own. It runs at a low speed, and depending on the waveform it is set to produce, modulates the parameters of the incoming sound, adding all sorts of interesting warbles, tremolos, even rhythmic effects, depending on what’s routed where.

Envelopes can be used to modulate the volume of your sound, and can also be used to more or less automate filter changes in your sound. When I first began using synthesizers, most envelope generators were 4 stage beasts known as ASDR envelopes. They controlled the "A"ttack, or how quickly the sound comes up, the "D"ecay, or how long it takes to get to its steady, main state, "S"ustain, or the level it maintains while the note is held, and the "R"elease, or the fade away time when the note is let go.

Today you’ll find synthesizers (especially the software variety), which can offer many stages… you can even "draw" your own envelopes in some cases, bouncing the sound all over the place before it goes away.

As I mentioned before, these modulators can be used to change the way various parameters of the sound react when played. It can become quite complex and confusing, but arguably much easier to keep control of in the virtual world than with real world synthesizers… especially early ones, which used actual patch cables to run the various parameters and oscillators to the various modulators.

So, that’s subtractive synthesis in a nutshell… an oscillator/sample (or several), filters to subtract certain frequencies, an LFO or two to "wobble" the sound, and an envelope(s) to tame timing elements of either the sound and/or the filters and LFOs. We’ll talk more next time about how to use this type of synthesis to create specific types of sounds, plus we’ll look at a couple of other types of synthesis and their toolkits, and talk about why some types of synthesis are better than others, depending on what type of final sound you have in mind.

Oh, and if you’ve been expecting to find my mug on more podcasts talking about synthesis at slysounds.com, I apologize. Life has gotten into the way of getting any more produced the past few months (well that, and the fact that I’m better and faster at producing audio than video…). I hope to post at least 2 in the coming month. Keep checking in, and say hello on the forum, always happy to hear from other Creatives! Till next time, happy noise-making!

January 01, 2007 8769
by Steve Cunningham Despite the fact that we live in an MP3, FTP, gotta-have-it-right-now world, I still burn through a lot of optical media every month. Compact disc masters for clients and demos for my agent, audio CDs for my...
Read More...
© 1988 - 2023 Radio And Production, LLC
Go to Top