I stumbled across REAPER during one of my marathon web-surfing excursions in the wee hours of the morning. Like many of us, I probably spend too much time on the Internet. Sometimes I even feel a little guilty, although if I wait a bit the feeling passes. But in this instance I found something on the web that promised to make all that “research” seem worthwhile. I found an inexpensive software editor for Windows called REAPER that can be had for as little as $40. That’s right, forty bucks. The obvious question: what kind of multitrack editor could you possibly buy for forty dollars? As it turns out, a surprisingly good one with very few things missing.

REAPER, which evidently stands for Rapid Environment for Audio Prototyping and Efficient Recording (yikes!), is a multitrack recording and editing software application that packs a full set of tools into a very small footprint on your Windows PC. It’s highly customizable, and includes both dockable windows and a number of skins for changing the app’s appearance. Moreover, it works with VST and DX plugs, and comes with a selection of native plug-ins that includes dynamics, EQ, both convolution and algorithmic reverbs and more, along with one of the most extensive routing matrices I’ve seen. It’s quite a bundle for forty smacks.

Best of all, it’s designed by a small company of accomplished software engineers who are clearly dedicated to making REAPER a player in the DAW field, and to continue to price it fairly. Cockos Incorporated is a three-year-old company founded by engineers who, in their pre-Cockos lives, were responsible for products including WinAmp, SHOUTcast, and Gnutella. Although REAPER is relatively new, it’s ready for prime time now and promises to continue improving with time. But do we really need yet another software audio multitrack? 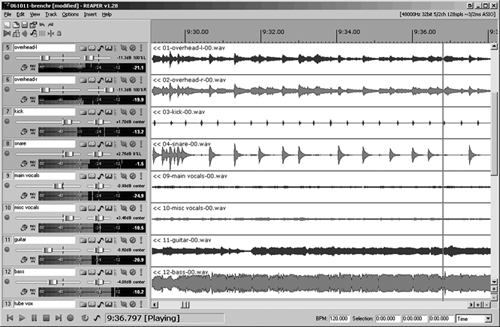 To say REAPER runs on anything is an understatement. The system requirements blithely say it works on Win95, ME, 2000, and XP, and requires a mere 128MB of RAM and 10MB of free space. It will of course be happier with more resources than that, and Cockos recommends one gig of RAM and at least as much disk space. You get bonus points for having a dual-core or other multi-processor computer, since REAPER is designed to take advantage of dual- and quad-Core machines by running effects on different CPUs. A quick check of the Performance Meter (use the shortcut Ctrl-Alt-P to pull it up quickly) shows CPU and memory use in real time. During my evaluations it never exceeded a 60% CPU spike, and averaged about 35% on a 2GHz Thinkpad with 768MB of RAM. In the age of bloatware like Vista, it’s truly amazing that REAPER works well under such tight constraints. 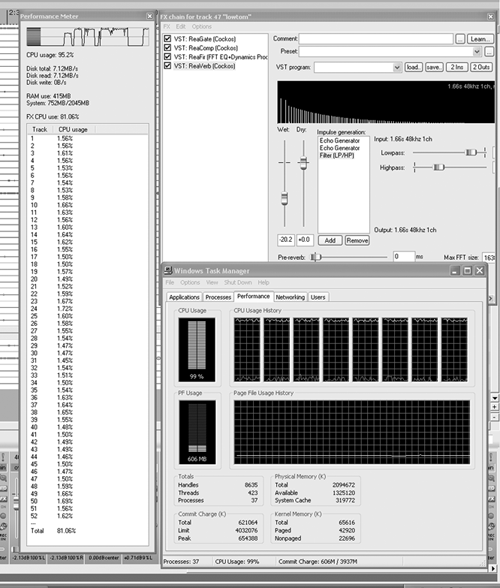 Assuming your interface supports it, REAPER will let you use sample rates between 8kHz and 192kHz, and bit depths of 8, 16, 24, 32-bit float and 64-bit float. The mixing engine runs 64-bit, so there’s plenty of digital headroom for processing and summing in the box at these higher bit rates. The software works with WAV and AIFF files, and includes codecs that let it function transparently with WavPack, FLAC, OGG Vorbis, and MP3 formats.