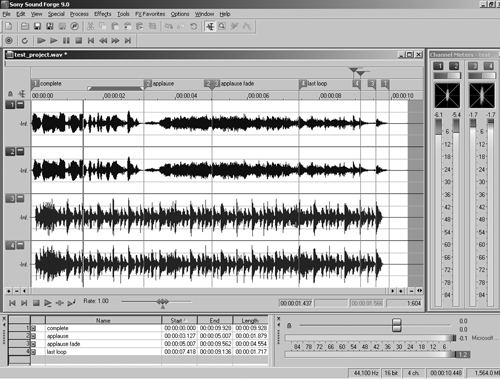 Sony’s Sound Forge has had a long reign as one of the heavyweights in stereo editing. We last looked at Forge in 2005 with version 8 (see the May 2005 issue of RAP), which added audio scrubbing, ASIO and VST support, and flexible keyboard mapping. Now Sony’s back with the ninth rendition of this venerable editor. Let’s have a look.

The most significant update in Sound Forge 9.0 is multichannel audio recording and editing. Before any of you go crazy here, let me assure you that these are crafted for surround work rather than true multitrack work, but they can be made to serve that purpose after a fashion. Other improvements include drag-and-drop mixing and pasting between channels, a phase scope and mono-compatibility meter, and improved snapping.

The system requirements for SF 9.0 have increased from version 8. The program still runs on Windows 2000 SP4 and on XP, and also on Vista (you haven’t switched to Vista yet, have you?). The processor requirement has gone from 500 MHz to 900 MHz, although if you’re still trying to make do on less than a 1 GHz processor, you probably aren’t looking at software upgrades anyway. The RAM requirement is a modest 256 MB, but once again I don’t recommend trying to do any kind of audio work on less than 512 MB of RAM (and preferably 1 GB). You’ll need 150 MB of hard disk space, a Windows-compatible sound card, and a DVD-ROM for installation (unless you install a downloadable version). DirectX 9 is included, as is Microsoft .NET 2.0.

I bought the upgrade online, which is a painless process. Sony has done a good job helping users manage their licensed products, providing an account section that shows everything you’ve bought and registered since 2002. Having downloaded all the files, I set about unpacking and installing them. The actual Sound Forge 9.0a .exe unpacked itself and began the installation process. It first installed a Microsoft Visual C++ package from 2005 — not a promising start, but perhaps no big deal. After approving the EULA between yours truly and Madison Media Software (evidently a Sony company), the installer did its thing. It installed SF9, and then announced that it would install the Sony Noise Reduction plug-in, which I had previously purchased separately. Fine.

I hit the Next button, and after thinking for a moment, the installer showed me the Welcome screen for the Noise Reduction Installation Wizard. Before I could move, it brought up a dialog that asked me to first remove the previous version. Clicking OK (the only choice in this instance) made both screens disappear. Evidently it wasn’t going to wait around while I uninstalled the previous version, so I headed over to the Add/Remove Programs panel to remove version 2.0b, which should be replaced with version 2.0e. Double-clicking the Sound Forge 9 installer again first reminded me that Sound Forge 9 was already installed (duh) and then proceeded to install the Noise Reduction plug.

Sound Forge 9 includes a suite of mastering plugs from iZotope, including a Mastering EQ, Limiter, Reverb and Compressor. This package comes with its own installer and serial number, which I dutifully ran and entered. The package also includes CD Architect 5.2 with its own installer and serial number, and a collection of impulse response files for the Acoustic Mirror convolution reverb plug-in, and a batch of test tones that are useful for calibrating your DAW and playback system. I skipped CD Architect since I already had an installed copy, but loaded all the other goodies, including the PDF manuals. Done and done.