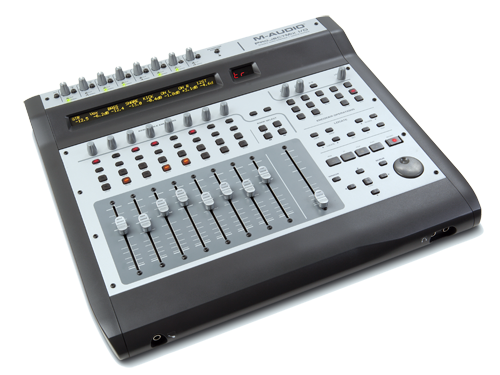 When it comes to control surfaces, particularly ones that work with Pro Tools, I admit to being spoiled. I have access to most everything that Digidesign makes through USC, including the budget-busting Pro Control, Icon D-Command, Control24, as well as the more moderate 002 and Command-8. But the production room at home features a well-worn (and lately cranky) Yamaha digital board with features I rarely use anymore. I’d like to replace it and reclaim some space, as well as reduce the AC bill (it’s a lovely space heater in the winter), but since I also use Vegas and Audition now and then it has to work well with those programs too. So when M-Audio dropped their ProjectMix I/O interface/control surface at the doorstep I was cranked.

The Project Mix I/O bears some resemblance to Digidesign’s 002 interface/control surface, which makes sense. After all, Digidesign and M-Audio are now both divisions of Avid, so one could speculate that they pooled their design resources, and both products are variations of the same theme. Like the 002, the ProjectMix I/O combines a multi-channel Firewire audio interface with a control surface based on touch-sensitive, motorized faders, and can be used with Pro Tools and several other software editors.

However, insiders at Digidesign claim that the ProjectMix was developed independently, and one actually intimated that the build quality was not the same. But in many ways, the M-Audio product actually turns out to be better in some respects. The ProjectMix comes with word clock I/O, has eight mic preamps rather than four, has a shuttle wheel and master fader in addition to the eight channel faders, and there are two headphone outputs rather than one. It can’t be used as a standalone mixer like the 002, and doesn’t have the fancy LED rings around its encoders, but overall the ProjectMix has more of what production folks need on a daily basis with just a few caveats. 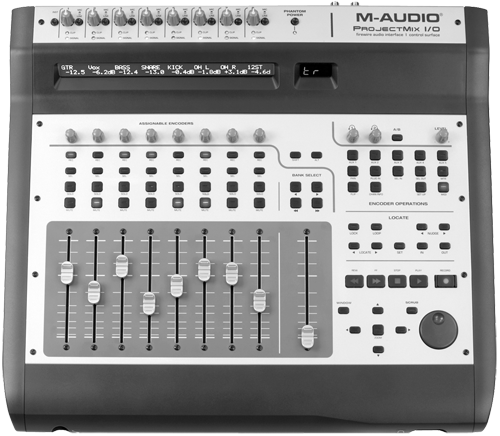 Given its moderate price, you might expect M-Audio to have cut some corners in the construction of the Project Mix, but it’s actually very solid. At 20 inches wide by 18 deep, the case is quite large and feels substantial, with rigid molded plastic edges and a metal surface that doesn’t flex under pressure. The motorized faders, perhaps the most important components, are reliably touch-sensitive and reasonably smooth and quiet. They are also full-length 100mm devices rather than the cheaper 60mm faders found on other products.

Some manufacturers of cheap control surfaces save money by not including a display, but the ProjectMix’s two-line LCD is clear and bright. There are no dedicated meters, but in most applications the LCD can be used to display channel levels. The only signs of chintz reside in a few details — the plastic gain knobs and rotary controllers look cheap, the laptop-style brick-in-a-cord power supply doesn’t inspire confidence, and the shuttle wheel is a bit wobbly.

But hey, at least it has a shuttle wheel, unlike some other controllers. And the included six-pin to six-pin and six-pin to four- pin Firewire cables are of decent length.

Installing the drivers from CD was straightforward, although it generated a couple of error messages while attempting to uninstall my existing M-Audio Firewire drivers, and it worked first time. The Project Mix comes with a very brief, fold-out Quick Start Guide and a PDF manual. The latter is not exactly comprehensive, and although it tells you the function of each control, you will need to consult your editor’s own documentation to learn how it works with a control surface. The system requirements are modest, and include Windows XP SP2 and Mac OS 10.3.9 or later. The documentation claims that the ProjectMix works on a Pentium III or Mac G3, but most editors require more horsepower than that.

The ProjectMix has eight XLR mic inputs, eight 1/4" TRS line inputs, and four 1/4" TRS line outputs, all of which are balanced. As you would expect, the microphone inputs all have phantom power and input gain controls, along with a switch to select either mic or line inputs (no, you can’t use both simultaneously). Unfortunately there are no pads on any of the inputs, but the mic preamps have a solid 55dB of gain and, according to the specs, will handle a maximum level of -3dBu with the trims set to minimum. But the preamps spec at -104dB (A-weighted) signal-to-noise ratio, and sound like the FW410 — clean and open with virtually no coloration or added noise even when cranked.

While the ProjectMix’s preamps are very serviceable, some of you may want to connect your fancy high-buck mic preamps to the line inputs to get an even better tone from your voice talent. But beware — while the line level inputs and outputs sound equally clean, they both max out at +10dBu, so there isn’t a great deal of headroom available in the analog domain.

Supported sample rates for all inputs and outputs are 44.1, 48, 88.2, and 96 kHz (including ADAT using SMUX II), at 24 bits of resolution. Dual front-mounted headphone outputs with independent level controls and A/B source switch allow for shared monitoring and cue auditioning, which is a minor joy. You can also enable zero-latency direct hardware monitoring via the driver control panel.

The four balanced 1/4" line outputs on the back are configurable as pairs for connecting monitors and other analog devices. But with no auxiliary outs or channel insert paths, you can’t hook up much in the way of outboard processing, nor can you conduct surround monitoring with only four outputs. I suppose you could feed the eight ADAT Lightpipe channels to an ADAT-to-analog converter, but that will raise the total price considerably.

Coaxial BNC connectors handle word clock in/out for external digital sync, plus there’s an RCA S/PDIF input and output, and MIDI in and out ports. The ProjectMix I/O has both Firewire 400 and 800 ports to connect it to your computer, although there are no extra Firewire ports for connecting a hard disk. Perhaps this is M-Audio’s way of encouraging us to put Firewire hard drives on a different Firewire bus. My desktop machines all have Firewire cards with two ports so there was no problem, but if you’re using a laptop then you’ll need a Firewire hub.

The audio interface portion of the ProjectMix I/O is compatible with Core Audio, ASIO 2, WDM, DirectX, MME and even GSIF2, so most audio editors will see the ProjectMix’s inputs and outputs. But the Big Deal here is that it’s one of the only non-Digidesign interface/control surface combos that is fully compatible with Pro Tools 7, giving the ProjectMix I/O one of the widest compatibility ranges on the market and making it extremely enticing for owners of other editors to get into the Pro Tools club for a mere $399 extra.

Unfortunately, the audio interface portion of the ProjectMix I/O is not compatible with Pro Tools versions prior to version 7, but the upgrade from 6 to 7 is cheap by Digidesign standards — $75 for LE, and $150 for TDM.

April 01, 1997 14053
by Jerry Vigil Unless you've been in hibernation for the past couple of years, you are aware that the cost of RAM, hard drives, and high speed computers has dropped dramatically. This has made very powerful computer systems very...
Read More...
© 1988 - 2022 Radio And Production, LLC
Go to Top