A Word from the Road from Indian John 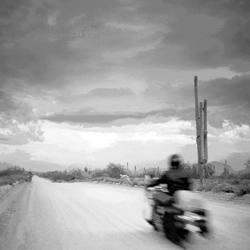 Let me tell you a little bit about my friend Indian John, and how he recently provided me with an unexpected cup of inspiration. I don’t fully know John’s background, and nor do I need to, but what I do know would best be described as colorful. John’s real title is Dr. John, and he is currently a Professor at a University. Though inspirational by themselves, neither of those two points has much of anything to do with what John did to inspire me this time.

I know John from my church/motorcycle group, Capital City Bikers Church (www.bikerschurch.com should you want to look for yourself). John is usually the first one out in the ice and snow with his Harley, and anyone familiar with January and February in eastern Canada will appreciate what kind of accomplishment this is. John likes his Harley, but he has a love for his late 40’s Indian motorcycle, a love I could share by just looking at it for hours. It truly is sculpture on wheels. John’s been having a lot of little problems with it, so he began the process of tearing it down to restore it to its proper glory.

Last summer, John took his Harley and rode off for his usual summer trip out to Oregon to visit his 90 year old mother. He strapped on some parts from his Indian to get them worked on along the way. The bike ended up looking like a pack mule as he headed out to cross the continental divide. He also slipped his laptop into his saddlebag and wrote daily journal updates which he’d send back to us by stopping for coffee at wi-fi equipped locations along the way. It was these musings that I found inspiring.

I’m going to try not to quote directly from John here too often as I feel that would be a bit of an invasion of privacy (although he said I could), but the way he strung his words together was like a favorite Hemingway novel. As he wrote, I could see the movie playing in my head. I could feel the wind and sting of the cold rain as he rode through Ohio, dancing with the thunderstorms and the semis on his Softail. He found a specific old machine shop in Illinois run by an old guy named Cotten who specializes in repairing Indian motorcycles. The way he described the scene was like reliving a moment in time at my grandfather’s basement work shop, with work done a certain deliberate yet delicate way, the way it’s been done for 50 years. The tools are used rather than worn, antiques to some, but always the correct tool needed to do the job properly. I could see the expressions on their faces as he described the conversation, complimenting Cotten on his craftsmanship. “I’m not that good. It’s just that no one else is doing this anymore. I’m just filling a vacuum.” I could just about see the old coffee can on the corner of the bench, holding assorted nuts and bolts along with about a dozen pencils, most of which were older than my daughter.

He told in warm detail about meeting Kenny, an ex-marine in Utah just back from another tour of duty in Iraq. Kenny was recovering from wounds both physical and emotional, and was having a hard time adjusting back to civilian life. The July 4th fireworks brought painful flashbacks and cold sweats, yet something keeps drawing him back to that land of death and murder, balanced with hope of a future for the Iraqi people that have made such a deep impression on him. Like almost any marine I guess, Kenny didn’t talk about his emotions that much. John is one of those people who can get you talking about anything, and the picture painted of Kenny was almost poetry.

While I’ve never been there, I can picture his ride across parts of northern Nevada in the worst of the summer heat, along a lonely 160 arrow straight miles between gas stations. Coming out of the desert and into the mountains, you could just smell the spruce and pine as he hit the tree line, feel the warm sun and cool air as he rose. John almost made it sound like rising out of the depths and into Heaven. You could see the smile of joy on his face with his words describing recognizable landmarks as he got close to home.

Now obviously I haven’t done justice to John and the passion and belief that he put into his words, but in reading about his five day trip, I wondered, as I often do, how I can take those words I’m reading and how they are making me feel, and apply that to the Radio Production biz.

I think I’ve made the analogy before, but radio spots and promos at their best are individual little people. Some are blonde, some are redhead, tall, short, speaking with lisps, walk with limps, have tattoos or piercings, speak several languages... whatever, they are individuals. What every individual has in common is a skeleton. The script is the skeleton and the words are the bones of the spots. We as Producers decide on the hair color, individual quirks, wardrobe, and the rest.

Yes, they are just words and bones, but are we giving them the attention they deserve? Are we feeding our creative muscles with enough calcium and vitamins to make strong and healthy bones, or are we harvesting them out of the cadavers of previous spots just to get something on the air? Is a 60-second bar spot mentioning 15 bands nobody’s ever heard of and hourly food and drink specials, a skeleton to build a person out of, or some horrible genetic anomaly? Is a 30-second spot with 10 lines of copy over an insert-style-here music bed, making sure to include the client name three times, the phone number twice, explicit directions including cross-streets and “across from” landmarks - not to mention spelling out their website address as it doesn’t make sense if you just say it - really going to do anything to inspire passion in the consumer to run out to that particular client? Just because words work in print, does not guarantee in any way that they will work on radio. We are trying to capture and coddle the listener’s souls as much as we are trying to inform them.

Roy Williams, The Wizard of Ads, who I respect highly and agree with generally (though not totally), was right in this case - the terrific mix or whiz-bang production effects do not get someone’s attention. What we are trying to do is to get someone to look off dreamily before closing their eyes and drift away to let the words do their magic in reaching and massaging their soul. C’mon, admit it to yourself! When you are critically listening to something, are you staring at the speakers or mixer or computer monitor, or are your eyes closed, just listening? The Wiz explains it very nicely with all the proper medical terms of your brain, but it’s essentially allocation of resources. Your brain is just an old computer in need of an upgrade. It can only process so many things at any one time. If you close programs you aren’t using, you open up more resources for the programs you are using, so if you close your eyes, the resources that are used to process vision (which are considerable) can be used by other parts of your brain to listen. When you do just listen, are you finding out if your skeleton is proportional and speaks to you, or does it cause or you to turn away in shame?

Yes, I was inspired by my friend John, what he saw on his trip, and the words he used to share it with us back home. John also included digital photos in his postings, but for some reason, my computer wouldn’t pick them up. It didn’t matter much to me though. I had already made my own. I can’t wait to hear about what happens, and who he meets on the return leg home!

October 02, 1990 10140
FLASH Noise Free 4 X 1 Stereo Switcher with Passive Mixing and MIDI from Uptown Technologies by Jerry Vigil This month's Test Drive is on a box mentioned in last month's interview. We wanted to know a little more about this...
Read More...
© 1988 - 2023 Radio And Production, LLC
Go to Top