Vegas Video’s basic editing functions are competent and easy to use. There are four tools that you’ll use for editing in the tracks window. The Normal Edit tool is the standard I-beam that we’re all used to. The Envelope Edit tool lets you generate and adjust Volume and Pan envelopes (more on that later). The Selection Edit tool lets you highlight regions in multiple tracks, and the Zoom Edit tool fills the track window with whatever region you’ve chosen with it. Fortunately the D key on the keyboard toggles through these four tools, so you’ll be able to avoid the button bar.

Like ProTools, Vegas Video gives you “handles” on the audio waveform that let you trim and fade without touching a menu. For example, if you hover over the end of a region then the cursor turns into a trim tool that lets you shorten or lengthen the region with a click and a drag. Hover over the triangle in the upper corner of the region and the cursor becomes a fade tool, complete with readout showing the dB level at that point. Mouse over the triangle in the lower left corner of a region and you can adjust the Snap Point, which acts as a sync marker for aligning effects to some point other than the beginning. And if you drag one region over another on the same track, Vegas Video automatically generates a crossfade between them. That’s slick.

While Vegas Video doesn’t have an on-screen mixer with faders and such, each track does have a Volume Envelope and a Pan Envelope attached, which allows you to “mix” your tracks as you wish. By right-clicking on the blue or red envelope line you can add automation “points” to the envelope, which you can then adjust to automate level and pan changes over time. The same right-click menu lets you choose a curved segment between points rather than a straight one, so you can generate some pretty complex automation moves quickly. The envelopes are independent of the audio underneath them, so if you want to move audio regions and keep the automation intact you’ll need to use the Lock Envelopes to Events button.

Having said that, Vegas Video doesn’t allow you to simply highlight part of a region and move just that part’s envelopes up or down, as ProTools does. You have to first establish envelope points, and that slowed me down a lot. I use the envelopes in ProTools to quickly silence mouth and breath noises, and having to set points first made that process more time-consuming.

You can create up to 26 stereo busses in VV, which are ideal for submixing and sending to and from effects. Each buss you create has as pair of master faders that show up next to the primary masters in the lower right, and the Pan slider on each track becomes a selectable Send control, accessed by clicking on a drop down menu. While this scheme saves precious real estate on the screen, the downside is that you can see only the pan control or one of the buss sends at a time.

Vegas Video allows audio scrubbing to find edit points, although in my opinion the scrub function is mis-named and is in reality a jog function (see below). The program gives you three methods of scrubbing, with the first and most obvious being to grab the Scrub Control located to the left of the transport controls. Moving it to the right makes the audio play forward, with full right giving you playback at twice real time. Moving it to the left does the same, but the sound plays in reverse. You can also use the keyboard to move the Scrub Control, or you can control-click in the track window itself. This last method is the most awkward, since you have to hover over the cursor in an area where there’s no event, usually on a blank track below where you’re working, and then press the Control key.

Why do I think Vegas Video’s audio scrub is really a jog? In the early days of DAWs, those of us involved in product design modeled our editing features to work like the venerable U-matic video decks. Many of these decks had a specific “scrub” knob, which when turned moved the tape forward or back as long as the knob was moving. You could spin the continuous knob around to find a point, and when you stopped moving it then the tape stopped. This was the equivalent of rocking the reels on an analog audio tape deck. On the other hand, you accessed a U-matic’s jog function by turning a bi-directional ring, which caused the video tape to move in a direction and at a speed proportional to the ring’s travel. The tape continued to move even when you stopped moving the ring, so to stop the tape you positioned the ring back at top dead center.

The latter is how Vegas Video works. When you invoke scrubbing using any of the three methods mentioned, the audio will begin to play until you release the scrub control, which will allow the control to jump back to its zero point and the audio will stop. The maximum speed in either direction is twice real time, and the control is responsive and smooth, but I’d rather have a real scrub function for finding tight edit points. You can transfer to another audio editor by pressing command-E. This opens the selected audio region in the editor of your choice — in my system this command opens the region in Sound Forge 6, which has a scrub function that does a “stuttering scrub” like a CD player. When you quit your external editor, you’ll be back in VV with the edited version of your region in place in the track.

Each track in VV has a virtual effects box connected inline to it. Clicking on the Track FX button brings up a window where a noise gate, a four-band EQ, and a compressor are connected in series to that track. These all work in real time, each can be bypassed separately, and you can click and drag the label boxes to change the order of the three effects. There’s a nice collection of presets attached to each of the three that provide a good starting point for tweaking your track’s sound. 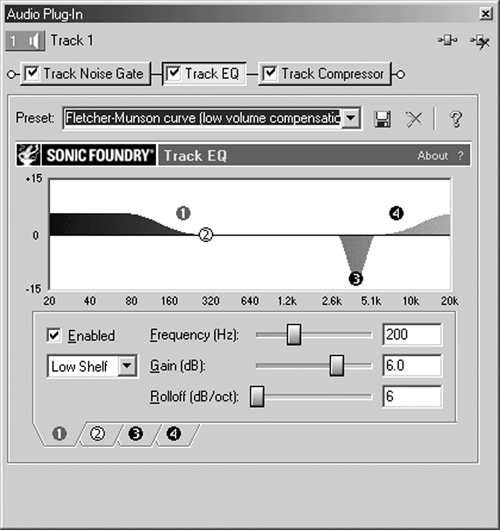 You can add other real-time effects to a track by clicking Insert Assignable Effects from the Tools menu. This brings up a dialog box similar to the inline box, but with a browser window showing the other DirectX plugs that come with VV. It works the same way in that you select an effect and it gets chained in series to the previous effect, and you can change the order and bypass them in a like fashion.

Non-realtime effects are also available from the Tools menu. This is where you’ll find your third-party effects, in addition to the ones supplied. For example, my beloved Waves processors show up in this dialog box as non-realtime processors.

If you tend to use a lot of processors and effects on your tracks, then at some point you’re computer’s CPU is going to poop out and cry, “No mas de effectors, por favor!” (Don’t ask why most PCs speaks Spanish, they just do. I know these things.) Fortunately VV lets you render a track, complete with whatever processing silliness you’ve assigned to it, to a new track. This is an offline function that chugs away, writes a new audio file to disk, and places it at the top of the tracks window.

By far my favorite effect on VV is its Time Stretch/Pitch Shift effect, which was called Rubber Audio in Vegas Pro/Audio. You find this effect by right-clicking on a region and choosing the Properties option. Time Stretch is right there at the bottom of that window. And this puppy not only sounds good, it’s nearly instantaneous even on long audio files. There’s a new algorithm for Time Stretch called Voice Optimized that really works well for smashing long legal into those last few seconds of a spot without having it sound processed. The quality of this effect is nearly worth the price of the entire product, even at high levels of stretch or squish. Nice.

Most of the new features in Vegas Video 3 have to do with CD-R operation. First among these is Vegas Video’s ability to burn Red Book audio CDs, using Sonic Foundry’s CD Architect technology (or so it says in the brochure). You can burn audio tracks either Disk-at-Once or Track-at-Once, right from the time line. Establishing tracks and gaps is as simple as dropping markers. VV will also import older CD projects created in CD Architect, and the program can now extract audio from existing audio CDs.

If you’re a Vegas Pro/Audio user, is the upgrade worth the money? That’s hard to say. You already have most of the really cool features in the program, especially if you already own competent CD burning software. On the other hand, the new Voice-Optimized time stretch is very good, and might knock you off the fence on the upgrade side.

If you don’t own a Vegas product and are looking for a competent multitrack editor, you should definitely try the demo version of VV. It doesn’t have all the bells and whistles of ProTools or SAW, but the basics are there, they work, and the program beats both of those on at least a couple of counts. Download the demo and check it out.

Vegas Video is available from dealers, or directly from Sonic Foundry’s website where it is priced at $479.96 for the boxed version, and $419.97 for the downloadable version. The upgrade from Vegas Video 2 is $149.95, and from Vegas Pro/Audio is $179.95. For more information in the US, contact Sonic Foundry at (800) 577-6642. For more information worldwide, visit www.sonicfoundry.com.

November 01, 1999 15341
by Steve Cunningham The current crop of high-end voice processors are mostly analog units that combine a microphone preamp, a compressor, some EQ, and perhaps a de-esser. But when Danish audio manufacturer TC Electronic decided...
Read More...
© 1988 - 2022 Radio And Production, LLC
Go to Top