Every now and then you come across a bargain that looks too good to be true. In the case of Syntrillium Software’s Cool Edit 2000 audio editor for Windows, this shareware wonder certainly fits that profile, but it’s definitely for real. While it won’t handle a huge multitrack session, it will handle a lot of day-to-day production work and hey, it costs 69 bucks!

Cool Edit 2000 is based on Syntrillium’s original shareware package, Cool Edit 96, with several new features added and 20 built-in effects. It’s still a basic stereo audio editor, but a new Studio Plug-In ($49) gives you a new screen with 4-track mixing capabilities. Since each track can be stereo, Cool Edit 2000 effectively becomes an 8-track editor for the princely sum of $118. You can’t beat that with a stick.

Should you need to edit a huge multitrack session, Syntrillium’s Cool Edit Pro software package can mix up to 64 tracks, supports multiple sound cards and SMPTE, has over 40 built-in effects, and will compete with the big boys for $399. At the other end of the spectrum, if you’re “between production jobs” and even $69 is a stretch, there’s a “Lite” version of Cool Edit 2000 that omits the built-in effects and sells for a measly 39 bucks. Something for nearly everyone, and they all have the same straightforward interface.

Syntrillium says you can run Cool Edit 2000 on a 486 or better. I would recommend a Pentium II or better for snappy performance, but I like the fact that you can actually do useful work on an otherwise useless 486! In fact, I was first introduced to Cool Edit 96 a year ago when I started teaching a radio production class at the University of Southern California. We still have that 486 in the computer lab, and Cool Edit 2000 runs just fine on it.

Since Cool Edit 2000 is shareware, you get to download the entire package from Syntrillium’s website and try it for 30 days before you decide to buy it. If you decide to buy, and you will be sorely tempted to do so, you will receive an email with a registration program, as well as a serial number. You run the registration program, enter the serial number, and you’re done.

Installation on my Dell PC was simple and without incident. I used SEK’D’s ProDIF card for getting sound into and out of the PC (see RAP September 2000, page 14). I also installed the Studio Plug-In, the Pro EQ Plug-In, and the Audio Restoration Plug-In... more on those later. 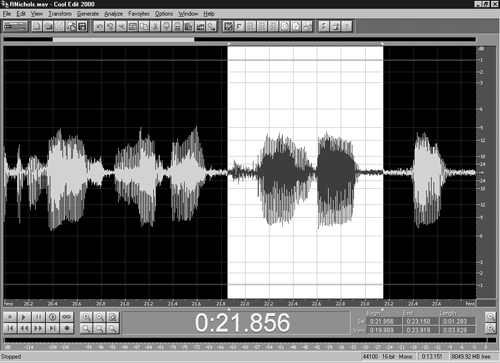 You record and edit digital audio files in the Waveform View (see “The Waveform View”). While there is a lot of information available in this window, the layout is not at all cluttered. Along the bottom is the on-screen metering, with the transport controls just above and to the left of that. The buttons next to the transport control the zoom level and provide a quick way of seeing the beginning or end the recording.

A large counter occupies the center of the bottom panel, and makes it easy to see where you are from across the room. To the right are counters that show the length of the current view and selection. At the far right are the amplitude zoom buttons that are useful for identifying low-level breaths and other noises.

Above the waveform display you’ll find the scrollbar and toolbar, which is fully customizable. Like many toolbars I’ve run across, this one is a bit cryptic at first as you try to figure out what all those little pictures mean. Fortunately, Cool Edit 2000 has implemented those little text pop-ups that appear when you leave the cursor over a given icon for a second or two, so it’s not difficult to figure out what’s what.

Recordings can be either mono or stereo, and are stored by default as .wav files in a temporary directory on your hard disk until you choose to name and save them elsewhere. Syntrillium reminds you that you’ll want to have three times the disk space available as your recording will use, to allow for undo files and various buffers that use disk space. The bottom line is that you’re best off getting a big hard disk if you’re going to edit digital audio.

While Cool Edit 2000’s default format is .wav, it will handle nearly any digital audio format you can think of, and several that you’ve never heard of. The list includes .aiff, .au, .mp3 (using codecs based on Fraunhofer, and the result sounds good!), RealMedia G2 (export only), Amiga .iff and .svx, and even Dialogic ADPCM .vox files (the format used on many voicemail systems).

Cool Edit 2000 has all the usual editing features, including Cut, Copy, Paste, Delete, Trim, and more. But it also includes some interesting twists, including multiple clipboards. The program has five internal clipboards for storing bits to be used elsewhere, and it can also use the Windows clipboard, giving it a total of six clipboards.

The Waveform View is also where you can apply any of Cool Edit 2000’s twenty built-in effects. These include amplitude effects like normalization and gain change, delay effects, basic filter effects, and time-compression and -expansion.

Cool Edit 2000 also has a scripting feature that let’s you create macros that work across multiple files. So if you have a folder full of .wav audio files that have to be normalized and converted to 32kHz .vox files, you can create a script to do it in a batch. Scripts are text files, so you can edit them directly until they’re just right.

Cool Edit 2000 has all the tools you’d expect to find in a competent stereo editor. But wait, there’s more... 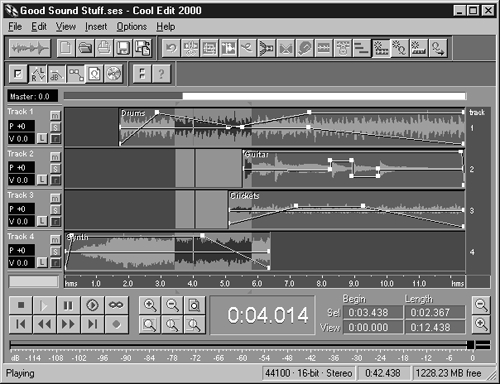 December 01, 2009 7862
by Steve Cunningham As anyone who’s been around the audio business for more than twenty minutes knows, Mackie has been making some very cool small mixers for a very long time. After all, the original Mackie 1604 is the stuff of...
Read More...
© 1988 - 2023 Radio And Production, LLC
Go to Top